Sources:
There is an annual of the DRV called Rudersportalmanach of which I have meanwhile got two years, Rudersportalmanach 1977 (on this page referred to as RA77) and Rudersportalmanach 2004 (on this page referred to as RA04).
If information about a flag is available neither in RA77 nor RA04, one could visit the websites of the clubs.
Very few images are based upon own paintings or photos.
Meanwhile, probably since 2010 there exists a flag chart of nearly all German rowing clubs. The images are tiny, but clicking upon the flag sometimes a reasonable augmentation will be blown up. Furthermore it seems that some of the images displayed there have been taken from our pages.

Method:
1) RA77 contains all flags of existing clubs in 1976.
Problems: The information is fairly old. The flags are depicted in Petra Sancta Code which comes from heraldry encoding the tinctures. Vertikal stripes f.e. mean "red", horizontal ones mean "blue", dots mean "yellow". The flags are very small (1cm x 1.5 cm).
Sometimes you can't see the details properly. In cantons (and in most flags) the letters of the inscriptions are always black on a white background. It may be that they have a different colour. In white flags with saltires usually the letters are black.
There are two types: rectangular flags and triangular pennants (German:"Wimpel").

You can see, what colour it is, it is red and blue but you can't see what shade of blue it. The ratio is 2:3, as you see above. But that is caused by the very small pictures and is wrong. I have measured a few helmsman's flags in Hamburg by myself. I found out that the "proper" ratio is 3: 5 as usual in Germany.

2) Some websites of rowing clubs display their proper flags.
Problems: The flags are displayed as flying colours with a flagstaff and a cord. But you can see the colours.

Primary source is always RA77 or RA04 unless a club does not appear in those annuals. The relations of objects on the flags are always estimated according to RA77. Some clubs may meanwhile be dissolved or have merged with others. Some of the clubs mentioned in RA77 do not appear in an actual namelist of DRV (=German Rowing Federation).

The flag information shall be very brief, just the following  topics: name of club, location of club, establishing-date, specials(only a few), description of flag, website of club.

My contribution starts with a very brief history of rowing in Germany, the rules for using flags, images of the pennants and flag of the federation.
Klaus-Michael Schneider, 21 Apr 2006

In 1836 the first rowing club in Germany ("Der Hamburger Ruder-Club") was established in Hamburg. In 1844 the first regatta club ("Allgemeiner Alster-Club") was established also in Hamburg. A regatta club is organising races between rowing-clubs (also yacht-clubs). In 1853 the "Germania Ruder-Club" was established also in Hamburg. Both clubs merged later to "Der Hamburger und Germania Ruder-Club". On the 18 March 1883 the German rowing federation (=Deutscher Ruderverband, abbr.:DRV) was founded in Köln. In 1951 the DRV became member of the International Rowing Association (Federation Internationale des Sociétés d'Aviron, abbr.: FISA, est. on 25 June 1892 in Torino(Italy)).
In 1956 the "Deutscher Ruder-Sport-Verband in der DDR (DRSV)" became also member of the FISA.
In 1990 or a little bit later after German reunion the DRSV merged with the DRV. The DRV is naming itself "the most successfull rowing-federation in the world", but to be honest, in times of DRSV the East German federation operated more successfully.
Klaus-Michael Schneider, 22 Apr 2006

There are two types in general: rectangular flags and triangular pennants, whose ratio due to German habits probably is 3:5 or similar.
Every club has two sizes of flags:
1) the helmsman's flag, which is stuck upon the stern of the rowing boat.
2) the flag, which is hoisted above the boat-house of the club. Sometimes the flag of the club is hoisted together with the DRV-pennant . The flag of the club is always topping the DRV-pennant. (see f.e. www.maruba.de). The same rules are valid for helmsman's flags. As hoisted flags are obviously a speed-killer while training hard or running races, helmman's flags are used very seldom. The boats are identified by their name (on the prow) and the name of the club (on the stern). Sometimes a small image of the DRV-pennant is added on the stern. Helmsman's flags are only used for ceremonial purposes (i.e. opening and closing the season, baptizing new boats, visits of VIPs) and when cruising on lakes, canals and rivers out of area. The club can be easier identified by the blades of the oars respectively sculls (=shorter oars). Some blades have the same pattern as the flag, some have a simplified pattern, some are just showing the colours. Nearly every club has its special blade-pattern. The flag above the boat house is usually only hoisted for ceremonial purposes. Some clubs in Hamburg however, located in a very touristic area as f.e. Alster-Lake, are hoisting their flags every day.
Klaus-Michael Schneider, 22 Apr 2006

The 1 January should always be considered as doubtful. It is probably the default, if the day is not exactly known. Some clubs without mentioning the day in 1977 turned out as being established on 1 January in the 2004 version of Rudersportalmanch.
Another remarkable thing is, that even when a younger club is overtaking an older one, always the date of foundation of the older club is taken as date of foundation for the new club. Old date pretends old age and a longer tradition and a better reputation.
Klaus-Michael Schneider, 19 Apr 2011

A "Zirkel" (lit.: compasses) is the logo or a kind of cypher of a fraternity. Fraternities are connections of academicians, students and pupils of high-level schools (in Germany: Gymnasium). They are usually for males only. Two types are of interest. 1) Rowing Departments of academic gymnastics federation and 2) academic rowing-fraternities. Most of them were members of ARB (Akademischer Ruderbund), which today exists just de jure and has only a few active members. The "Zirkel" is a flourished connected ensemble of the initials of the fraternity topped by a wavy line and always accompanied by an exclamation mark. It is often displayed in the canton of the flag of an ARB-club and an essential element of the coat of arms of a fraternity. There is no exclamation mark, if the fraternity is not active, which means normally that the fraternity was located in the parts of the country ceded to Poland and Russia after WW2 and that there are no members having "active" status, "active" members are usually the juniors. "Alania" in Hamburg is the only inactive fraternity I know.
Klaus-Michael Schneider, 12 May 2006 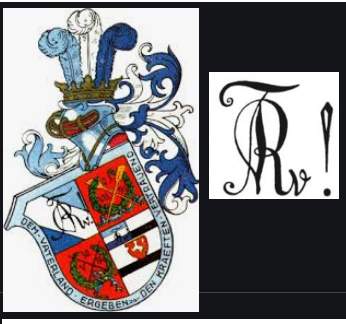 It's a blue pennant with a white shield in the centre. In the shield is a black eagle armed and tongued red.
Source: own photo, a sufficient image can also be found at RA04, p.230
Klaus-Michael Schneider, 22 Apr 2006

In a documentation concerning Berlin Rowing clubs, I found a DRV flag. The pattern of the pennant was simply displayed onto a white flag. The flag was hoisted on the prow of a gig boat side by side with the NS-water-sports-flag on the stern. The image is subtitled as DRV-flag
Description of flag: "exercise tour 1936".
According to source the flag of the club or the federation had to be replaced by the NS-water-sports-flag by order of NS government in 1936. The flag of the federation could be used as a jack (German: Stander) instead, which had to be stuck upon the prow.
Source: Festschrift: "Von der Rudergesellschaft "All Right" zur Treptower Rudergemeinschaft e.V. - 125 Jahre Rudern auf dem Treptower See"; Berlin 2004; p.8
Klaus-Michael Schneider, 19 Apr 2011

The pattern is like that one DRV pennant with the shield shifted to the top.
Source:a photo can be found here
Klaus-Michael Schneider, 22 Mar 2011

It is a white pennant pointing to the bottom, edged on two sides by a thin cord having the German colours black - red - yellow. Below the centre is the coat of arms of former German Democratic Republic. At the top is a dark blue, centred inscription: "Deutscher" (1st line) "Ruder-Sport-Verband" (2nd line). Below are two oars of the same colour ordered horizontally. Between both oars is an inscription of the same colour "DRSV". The blades are pointing to different directions: upper blade left, lower blade right(visible). On the lower blade is a white inscription "DDR".
Source: based on a photo sent by Dr.Hans Eckstein , former head coach of SC Einheit Dresden and DRSV-coach of the males.
Klaus-Michael Schneider, 21 Mar 2011


"Horizontal" and "vertical" means visible when blade is in action, i.e. "horizontal" is parallel to the shaft and orthogonal to the baseboard, "vertical" is parallel to baseboard and orthogonal to the shaft. It is analogous with "bendy" and "sinister bendy". Only a few blades are displayed additionally within this contribution given in classic pattern with natural colour (of wood) here is displayed as brown.

The anniversary pennants are mentioned as "association flag with gold and silver" in Rudersportalmanach 2004.
They are granted to rowing clubs celebrating their 75 years anniversary (silver) (see image above left) or 100 years anniversary (gold) (see image above right). The pennants' width relative to height is bigger than on standard pennants. The shield has a thin bordure, which is yellow (for gold) on 100-years-pennant and probably very light grey (for silver) on 75-years-pennant.
Source: "Rudersportalmanach 2004", p.222; an image of a 100-years pennant can be found among the photo galleries of Potsdamer RC Germania. The information was reconfirmed by Corinna Blanckmeister, a member of the board of that club.
Klaus-Michael Schneider, 9 Dec 2008

The blade is horizontally divided into black over red over yellow, the colours of the German national flag.
Source: own photo 2006
Klaus-Michael Schneider, 9 Dec 2008

It was a white blade divided per bend by a black over red over yellow ribbon, the colours of the DDR (and German) national flag with the coat of arms of the DDR in its centre.
Historical note:
DRSV was the rowing association of former DDR and between 1972 and 1990 usually a bit more successful than DRV.
Source: information provided by Jens Pattke
Klaus-Michael Schneider, 9 Dec 2008