German Rowing Clubs ordered by name of location (a)

Source:
If source is not given explicitely, all information is available from the flag chart of : Rudersportalmanach 1977.

Name: Ruder-Club Aken e.V.
Located in: Aken (Anhalt)
Established: 16 April 1919
Description of flag:
It is a quarterly divided flag. The lower fly and the upper hoist are plain white but in the upper hoist there are black capital letter "RCA".The lower hoist and the upper fly are 11-striped rectangles with alternating red and white stripes starting with red ones. In the centre of the flag is a blue roundel showing the image of the coat of arms of Aken. In the image are two white church-spires with a wall, all with black brickwork. Between the spires stands a bishop in a red robe holding a crozier in his left hand. Beside the towers are little red shields showing white towers each with a feather on top.
Source: flag chart
For further information click: club website.
Klaus-Michael Schneider, 16 Jan 2007

Name: Ruderverein 'Rhenus' e.V.
Located in: Andernach/Rhein
Established: 15 March 1910
Description of flag:
The flag is divided per saltire into blue and white. In its centre is a modified coat of arms of Andernach. The crossbars here are blue - whie - blue. The whole is topped by a white mural crown fed red.
For further information click: club's website.
Klaus-Michael Schneider, 15 May 2011

Name: Anklamer Ruderklub e.V.
Located in: Anklam (West Pomerania)
Established: 8 October 1908
Description of flag:
The white flag is divided by two narrow blue horizontal lines. Between the lines are the figures of the coat of arms of the municipality of Anklam all in red. It is a rampant griffin standing upon a gate.
Source: flag chart
For further information click: club's website.
Klaus-Michael Schneider, 16 Apr 2011

Name: Anklamer Ruderklub e.V. Located in: Anklam (West Pemerania) Established: 8 October 1908 Source: http://www.rudern.de/verband/mitglieder/flaggentafel For further information click: www.anklamer-ruderklub.de Description of flag : The white flag is divided by two narrow blue horizontal lines. Between the lines are the figures of the coat of arms of the municipality of Anklam all in red. It is a rampant griffin standing upon a gate. Klaus-Michael Schneider, 16 Apr 2011

Name: Ruder-Club Aschaffenburg von 1898 e.V.
Located in: Aschaffenburg
Established: 8 August 1898
Description of flag:
The flag is divided per pale. At the hoist is a green field with a golden rampant lion facing the hoist. The flyend is white with a red saltire and golden letters: "A" (top), "R" (hoist), "C" (flyend) and "v.1898" (bottom). The "v." is smaller and above the numbers.
For further information click: club website.
Klaus-Michael Schneider, 24 May 2006 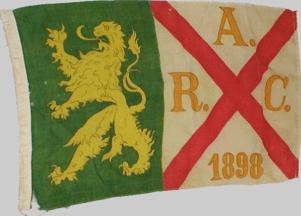 I believe that I have identified the 1898 Lion Flag as belonging to Ruder Club Aschaffenburg 1898.
I researched this flag entirely through the internet and arrived at the following website page, http://www.ruder-club-aschaffenburg.de/downloads/rca-satzung.pdf, needless to say, it's in German. However, I downloaded the .pdf file and converted it into a text file, then using my Multilingual software converted the German text into English.

2, a right-angled divided field. The left rectangle of the flag field shows a golden, rampant lion, facing the hoist on green background. The remaining larger rectangle of the flag field has a white background and is divided by a red saltire. In the three upper triangle fields divided by the bars the initial letters of the association name are in black set in golden Latin large letter attached. The year of the establishment of the association is drawn in in the same way in the lower triangle field. The large "A" of the abbreviation for Aschaffenburg is in the upper triangle field.
David S Smales, 23 Sep 2005

David S Smales is absolutely right. It is indeed the flag of "Ruder-Club Aschaffenburg von 1898 e.V." without any doubt. According to Rudersportalmanach 1977 (p.187) the lion facing the hoist is white however, the letters in the flyend are black and dotted. According to Rudersportalmanach 2004 (p.232) the flag of the club is nearly the same as the unknown lion-flag. Only the inscription in the bottom of the flyend is "v.1898" instead of "1898", the "v." is above the "1898". According to club's website the flag is the same as the one in Rudersportalmanach 1977, but the letters are not dotted and the inscription in the bottom of the flyend is "v.1898" too. You can see this variant on  Club's Website on the frontpage. I think those little differences depend on the age of the flags or different manufacturers and don't really matter. Smales is wrong however about another point. Of course German and Bavarian is not the same. All papers are of course written in German and I think, it is important to the people of Aschaffenburg being Franconians and not Bavarians although this region (today district of "Unterfranken") is part of the State of Bavaria (today "Freistaat Bayern") since 1803. To Northerners like us, it seems as if e.g. Dutch and Norwegian are more similar to German than Bavarian.
Klaus-Michael Schneider, 17 June 2006

Yes, the flag shown is definitely from the Ruder-Club Aschaffenburg.
I am a member of and the Press attache for the RCA.
Diana Seehafer, 23 June 2010

Name: Yacht- und Ruderclub Attendorn
Located in: Attendorn
Established: 8 January 1965
Description of flag:
It is a white pennant with 8 black trapeziums forming a centred cross. In the upper hoist is a red crescent with its horns facing the hoist. It is akind of armorial pennant of the city of Attendorn.
For further information click: club website.
Klaus-Michael Schneider, 12 Jan 2007

back to alphabetical listing of all clubs click here.