Aspect ratio of the flags: 2: 3
The first flag and the coat of arms of Alexandria show the goddess Isis standing in front of a ship and holding a papyrus sheet in her hand. The ship symbolizes Isis as the protective goddess of the sailors, the papyrus sheet as the guardian of wisdom and science. All the symbols of Alexandria show a stylized representation of the ancient lighthouse of Alexandria, in the last flag from 2014 this representation is the only symbol.
Ian MacDonald, 17 February 2021

The first flag from 1952 included the statue of Isis and the papyrus sheet.
Ian MacDonald, 17 February 2021

The Alexandria lighthouse was built under the reign of Ptolemeus II Philadelphes (283-246 BC). It was a 135-m high tower, on the top of which a burning fire was reflected by mirrors to be seen from a long way off at sea. The tower collapsed in 1302.
On top of the tower stood a statue of Zeus Savior.

Grand Atlas de l'Archéologie (Encyclopaedia Universalis ed., 1985) shows the facsimile of the fragment of the papyrus Didot (IInd century BC), kept in Louvre Museum in Paris (AE/E 7172). The fragment includes two epigrams by Poseidippos of Pella, a poet from the beginning of the IIIrd century BC. The first poem is a ten-line dedication of the lighthouse addressed to Proteus, Poseidon's son, marine God, seal Shepherd and Lord of the island of Pharos according to Homer:

'This safeguard of the Greeks, this watchman of Pharos, O! Lord Proteus, was erected by Sostratos, son of Dexiphanes, from Cnide [a city in Asia Minor]. In Egypt, Thou shall not have observation posts on heights of islands: the bay which welcomes the vessels spreads level with the waters. [I guess contrary to the rocky coats of the Greek islands.] Therefore, standing up straight, a tower, which can be seen from infinite distance in the daytime, stands out against the sky. In the dark, the sailor shall notice quite quickly in the middle of the waves the big fire burning on top, and shall sail straight to the bull's Horn, and he shall not fail reaching Zeus Savior, O! Proteus, the one who sails in these parts.'

The lighthouse was ca. 100-m high (Petit Larousse Illustré, quoted above, says 135 m). The first story was a high square bastion of 60-m width. The second story was octagonal and 30 m high. The third story was circular and 7 m high: it was the shield of the colossal statue of Zeus Savior, Protector of the Sailors.
The island of Pharos was connected to the mainland by a pier of more than one kilometer, called Heptastadion [Stadion, which gave 'stadium', was a Greek length unit, 147-192 m], which delimited two harbours.

If you look at the two images of the flag shown here, you will notice that none of them fits the archaeological description of the lighthouse, which is represented on the flags more like a candle or a TV-tower. 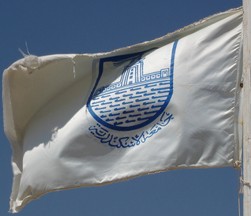 Shown on the arms is the famous lighthouse, one of the seven wonders of the (classic) world.
Flickr photo by Loay Awad, uploaded on 31 Jul 2007.

University history, showing the arms can be found at http://www.alex.edu.eg/history.jsp.
Jan Mertens, 7 December 2008