The municipality of Andernos-les-Bains (9,259 inhabitants; 2,001 ha) is located in the Arcachon Bay, 40 km west of Bordeaux.
The region of Andernos was settled very early in the history, as proved by the remains of a Gallo-Roman villa found there in 1902 and dated from the end of the 4th century. In the 19th century, it was believed that Andernos was in the past a Greek colony named Andros (lit. "the man"). The name of Andernos is indeed derived from Latin Andernossum, meaning "Andernus' villa". The suffix -ossum, later -os, common in Aquitaine, is cognate with the more common suffix -acum used to designate the Gallo-Roman villae.
(After Origine des noms des villes et villages de Gironde by M. Korsak and J.M. Cassagne, Éditions Bordessoules).

In the Middle Ages, the St. Eligius church, whose building started in the 11th century, was a stopping place on one of the branches of the Way of St. James. The church still has a fresco made in the 15th century showing the life and martyre of St. Quiteria. According to the legend, Quiteria was the daughter of a Wisigoth lord of Toulouse, where the Arian heresy was the official religion; she converted to (then) orthodox Christianism and fled to avoid being married with an Arian lord. Quiteria was captured and beheaded in Aire-sur-l'Adour in 127. A source gushed forth on the place where her head had fallen; like several other cephalophorous saints, she took her head in her hands and carried it to the place where the church of Aire would be built. In 589, the Council of Toledo canonized her. St. Quiteria is venerated in the south-west of France, in Spain and in Portugal.

After the French Revolution, Andernos became a municipality, including the neighbouring village of Arès, the seat of a powerful Barony under the Ancient Regime. It is probable that the seat of the municipality was set up in Andernos rather than in Arès to limit the influence of the last Baron ofArès, the Royalist François de Belcier. Arès became an independent municipality by the Law of 9 January 1851. Before, most Municipal Councillors of Andernos came from Arès. The most famous of these Councillors was David Allègre (1776-1846), an officer of the Imperial and Royal Navy in Brest who purchased the castle of Arès after his retirement.
On 28 March 1836, six fishing boats were wrecked in the bottleneck forming the entrance of the Arcachon Bay. The event caused the death of 78 men and made 160 orphans; it remained locally known as lou gran malhou (le grand malheur, the big calamity) and was for a while a national issue. Allègre decided to use his wealth and knowledge of navigation to improve fishing safety; he ordered from a shipyard in Bordeaux the trawler Le Turbot, launched in Arcachon in 1837 as the first steam trawler in the world, years before steam replaced sails. Allègre has related his experience in the booklet De la pêche dans le Bassin et sur la côte extérieure d'Arcachon, published in 1841 in Actes de l'Académie Royale des Sciences, Belles-Lettres et Arts de Bordeaux. In 1840, Allègre built in Andernos the fish tanks still visible near Pointe des Quinconces.

In the beginning of the 20th century, Andernos developed as a posh sea resort; severals beautiful villas from that period have been preserved until now. The great actress Sarah Bernhardt (1844-1923, aka La Divine, one of the models of the actress portrayed by Marcel Proust as "La Berma") stayed in Andernos in 1914-1917 and said: Andernos, quelle que soit la promenade que l'on fasse, on est entouré de beauté ([In] Andernos, wherever you walk, you are surrounded by beauty).
Andernos progressively evolved to a family resort, highly appreciated for its safe sandy beaches, spreading over 4.5 km between Lanton and Arès, its marina and its oyster port with traditional, bright-coloured booths. At lower tide, wide sandy areas locally called crassats emerge out of the sea and are the best place to pick up shells, mussels and crabs. The port was revamped in 1926 with the building of a 232-m long wharf, promoted by Mayor Louis David. This is still the longest wharf in the Arcachon Bay.

The flag of Andernos, as seen on the municipal website, is white with the municipal logo in the middle and the name of the municipality in blue letters below the logo. The blue part of the logo represents both the "A" for Andernos and a geographical outline of the Arcachon Bay. The orange square represents the location of Andernos on the Bay.

Andernos is twinned with the towns of Nussloch (Germany, 1977), Segorbe (Spain, 1993), and Largo (Scotland, 2008).
The town-twinning is celebrated by a variant of the European Union flag, hoisted together with the French flag and the municipal flags in several places, including the promenade and traffic circles.
The flag has four small flags in the corners, French in upper left corner, German in upper right corner, Scottish in lower left corner, and Spanish, without the arms, in the lower right corner. 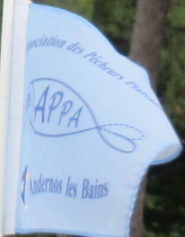