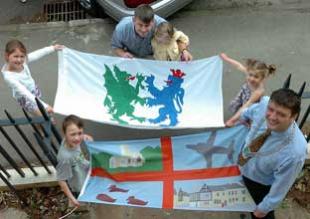 I found here a news about new flag of Fairford, England. It was designed by five year-old-boy:
http://www.wiltsglosstandard.co.uk/news/4415063.New_Fairford_flag_raised/

3rd June 2009
FAIRFORD’S new flag is now raised and flapping in the wind above Fairford Community Centre. It was designed by James Landa-Font, aged five-year-old at the time, as part of a joint competition between Fairford Town Council and RAF Charitable Trust Enterprises last year.