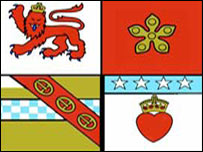 On 26 September, BBC News Service reported the adoption of a new flag by the Angus Council and the debate the decision has triggered. There seems to be some strong political background behind the case.

"The local authority has approved proposals to create a new flag based on the council's coat of arms, at a cost of more than Ł4,000. The standard would be raised outside 10 key buildings across the region instead of the national flag. Critics have set up an online petition against the idea, which has so far attracted more than 1,000 signatures. The measure was agreed by the Angus Alliance, a coalition which replaced the SNP as the ruling administration at the last election. SNP councillor Donald Morrison told the BBC Scotland website that he thought the decision was "wrong".
[More critics of the decision are included in the article.]

Councillors in Angus recently approved the plan, which was put forward by the local authority's chief executive, David Sawers. In a committee report, Mr Sawers said: "The matter of flag flying is one for individual local authorities to determine. "At present the Saltire is flown on key council buildings within each of the burghs and is only replaced by the Union flag on Remembrance Day or for certain Royal events. "It has been suggested that it would be more appropriate for a flag that represents Angus uniquely to be flown at key council buildings and for this flag to be based on the council's Coat of Arms." There has been talk of a compromise, where additional flagpoles would be erected so both the Saltire and the Angus flag could fly over council buildings.

The design consists of four quarters containing a crowned lion passant, a cinquefoil, a checked stripe crossed with buckled belt and a depiction of the heart of Robert the Bruce to represent the four ancient earldoms of Angus. [...]

The Angus flag was an interesting case. Angus Council used to be run by the Scottish National Party (SNP) who flew the Saltire from the main council buildings in each town. At the last elections the SNP were defeated by a coalition of the opposition parties, including several independent (non-party) councillors, who called themselves the "Angus Alliance" (AA). One of their first steps was to remove what they considered the SNP symbol, the Saltire, and replace it with a new "Angus" flag. Instead of asking for advice, or indeed accepting it when offered (I phoned them to say I would supply the artwork if they wanted it and my book which shows the Angus flag in it was in one of their own libraries!) they just tried to create a flag from their coat-of-arms. Unfortunately they didn't quite get the idea - they just tried filling in the space around a shield to make a rectangle, adding an extra star to the Douglas arms, not moving the bend so it started in the corner, etc. This is the image on the BBC site Valentin references. Before the flags were made the manufacturer picked up the extra star and removed it but unfortunately didn't fix the bend, so it is still wrong.

There was a large backlash against removing the Saltire, which of course is the symbol of Scotland, not the SNP, and the Council had a rethink. In the end the decided that the solution was to fly both flags, which is what they do at their head office in Forfar. Unfortunately most of the other council buildings didn't have two flag poles so that are having to add extra poles at each. Even worse almost all the council buildings are listed historic buildings with strict planning controls, and then there is the health and safety aspect to consider. As a result the cost of adding the second poles, along with the necessary safety platforms, railings, new ladders, etc., has skyrocketed. The 4000 pounds that the flags cost to get made was nothing compared to the costs of the building work to fly them!

Their woes didn't end there. Shortly after starting to fly both flags from Brechin City Hall, a strong wind caught the flag and shattered the fibre glass pole, depositing the national flag on the street in a soggy pile.

So far, the only thing anyone in Angus can think the Council has done is mess up the flags. Running the county seems to have been a lower priority (judging by the shocking state of the roads). You might wonder why I know so much about this particular flag. Well I come from Angus! That's why it's in my book and why I heard about the flag fiasco. As far as I know they are still trying to sort out the extra poles on many of the buildings.