There are flags for all parishes in Guernsey. Parishes of St. Anne (Alderney) and of St. Peter (Sark) are also probably using their islands flags. Here is an extract of an article from the Guernsey Press, published 26/3/2004:

"Key to the island by Nigel Baudains

GUERNSEY’S new Ł19.5m. airport terminal was officially opened yesterday. Carrying out the ceremony, the Bailiff, Sir de Vic Carey, said he hoped those who had driven the project through would be remembered for their foresight and wisdom.
...
Primary school pupils raised the 10 parish flags to a ceremonial fanfare from the Guernsey Concert Band.
..."

Now we "just" have to find them.
Valentin Poposki, 3 September 2005 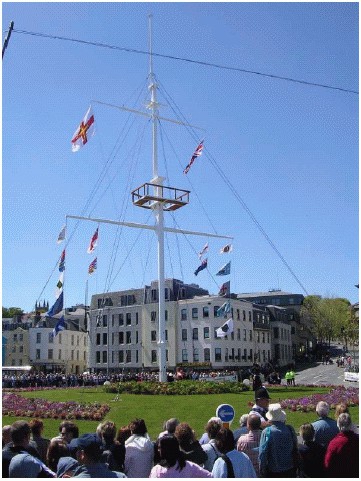 I found a photo showing British and Guernsey flags and all 14 local flags of Guernsey. That means 10 parishes, Alderney, Sark, Herm and Jethou.
Valentin Poposki, 3 September 2005

On the BBC's web site may be seen another picture of the same location, from a different angle, showing the Royal Standard at the very top of the mast and The Queen standing at the bottom of it (she is the lady on the left: it looks as if the mast is coming out of the top of her head): http://www.bbc.co.uk/guernsey/content/images/2005/05/17/hrh_sea_guernsey_mast_tim_feak_242x352.jpg, on the occasion 09 May 2005 of her unveiling of a stone at the bottom of the mast on Liberation Day, marking the sixtieth anniversary of the liberation of Guernsey from German occupation at the end of World War II. There is also this diagram of the mast: http://www.bbc.co.uk/guernsey/content/images/2005/04/13/flag_mast3_180x300.jpg together with further information regarding the purpose of the mast on the same web site. However, there are no further close up photographs of the smaller flags under discussion on the same web site, or those to which they are linked.

One further Guernsey related flag matter, probably unconnected. During April and May of 2003, there was an artist in residence at eight Guernsey schools whose theme was "to work on flags of the island adopted by schools." There is no indication as to whether the two events are connected.