The symbols were designed by the Heraldic Art d.o.o. company, from Rijeka.

The flag is prescribed in proportions 1:2, blue with the coat of arms, bordered yellow, in the middle, its height being 2/3 of the flag's width.

Coat of arms of Gospić

The coat of arms is described in the Decision as follows:

The administrative approval simply says "in red a silver/white marching wolf holding a sword" (Gules a wolf rampant or holding a sword.
The wolf is native in the region and not unusual. It is also symbolic for virtues of the population. The erect sword symbolizes their determination to defend themselves.

The ceremonial flag (photo, photo) is a dark blue gonfalon with the coat of arms in the middle, the name of the town above in two arches and ornamentation below.

The table flag (photo) is similar to the ceremonial flag, but much simplified - a blue vertical flag ending triangularly without any border, with the coat of arms in the centre and the town's name inscribed in two arches above it.

The previous symbols of Gospić were prescribed by Decision Odluka o grbu i zastavi Grada Gospića, adopted on 27 june 1994 by the Town Assembly and published in Službeni vjesnik Grada Gospića, No. 4.

The flag is in proportions 1:2, blue with the coat of arms in the middle. The text of the description is rather unclear whether the flag is intended to be fringed yellow or bordered yellow, but I believe that the fringe was meant.
The coat of arms, as shown by Enver Ljubović [lju01], is "Per fess fimbriated or vert and checky gules and argent and in chief or mountains azure, overall in dexter a church argent its belfry roofed sable". It shows the Velebit mountain range with its highest peak Visočica in the centre. There are fourteen visible squares of the Croatian historical coat of arms, while the green field symbolizes the economic basis of the town - agriculture and forestry. The facade shown is the Church of Annunciation, at the time the parish church in Gospić, today the Cathedral. The coat of arms width to height ratio is prescribed as 1:1.33. 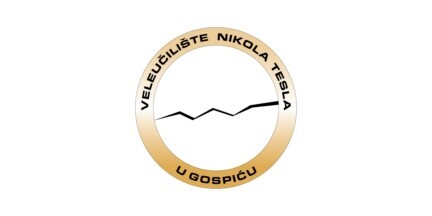 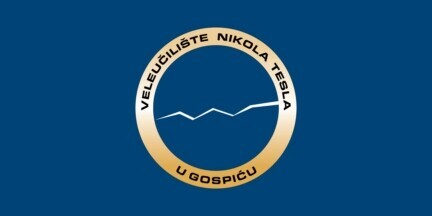 The flag of the Polytechnic "Nikola Tesla" in Gospić (photo, video) is blue (current flag) or white (former flag) with the institute's logo.
The institute is named after Nikola Tesla (1856-1943), a famous inventor, electrical and mechanical engineer and futurist, who was born in Gospić's village of Smiljan.

Coat of arms of Gospić in the Socialist period (1980)

The 1994 Decision invalidates "any prior Decision of the Assembly of the Municipality of Gospić that regulated the coat of arms and the flag". In his book Natjecanje za grb [cim85], Pero Čimbur reports his work on designing of the coat of arms for Gospić, adopted in 1980. For what I know, no flag was adopted to go with it.
The coat of arms was "Vert three barrulets azure superimposed with a rotational symbol argent, in chief a mullet of five gules and in base a Japodić helmet also gules".
The stripes represent the three rivers of Gospić - Novčića, Lika and Bogdanica. The rotational emblem represents the rotational magnetic field and the electric turbines, honoring the inventor Nikola Tesla who was born in Smiljan near Gospić, the red star stands for the Socialist system and the liberation struggle. The bronze Japodić helmet preserves the ancient heritage of the region. Allegedly this helmet is the origin of the modern traditional folk headgear.
The coat of arms was not used after 1990, although it was de jure replaced only in 1994.