Nagylak is a new village in Csongrad County (est. 1923), formerly part and railway station of Nagylak village (now Nadlac town, Romania) annexed to Romania by the Treaty of Trianon in 1920. The red gate on the flag relates to the important border crossing.
István Molnár, 9 April 2001

Nagylak is a village in Csongrád county - really closed to the Romanian border (see map at <www.terkepcentrum.hu>. Nagylak originally is a part of Nagylak (now Nadlac, RO) town. After the Treaty of Trianon the Nagylak Rlw.St. became a new village in 1922.
2001 Population Census: 628 inh. Ethnic affiliation: Hungarian: 79,6%; German: 0,5%; Rumanian: 1,3%; Slovakian: 0,7%; unknown, did not wish to answer: 20,3% Religion: Roman catholic: 38,2%; Greek catholic: 1,0%; Calvinist: 9,4%; Lutheran: 9,4%; belonging to other church/denomination: 0,5%; does not belong to any church/denomination: 19,8%; unknown, did not wish to answer: 21,8% (see <helynevtar.ksh.hu>).
History of Nagylak/Nadlac/Nad'lak: The first mention of the castle is from 1192. In 1241 the Mongols occupied the castle and killed the defenders. The first mention of the settlement is from 1313 as 'NOGLOK'. The first known landlord was Egyed de Monoszló (Gergely Monoszló?) . The settlement was the seat of the Tenure of Nagylak (60 villages and 14 farms in the 15th century).  On May 1514 (the pheasant revolution leadered by György Dózsa) there was a great massacre in Nagylak. Landlords was killed setllement was burned. The Hungarian inhabited settlement settled by Serbs  in 1464 and King Mathias I. gave the town to the Serbian lord, Jaksic in 1474. The new castle (brick) was built in 1518 by the Jaksics. After the battle of Mohács (1526) the settlement became a part of the Kingdom of John I. After the death of King John I. the settlement was occupied by the Habsburgs. In 1550 the castle and the town was occupied by the Turks (by Gazi Kasim leader of Buda Vilayet). In 1550 it was recaptured and burned by István Losonczy the Captain of Temesvár. In 1552 it was captured by the troops of Queen Isabela (widow of King John I.), later it was captured by the Turks and in november recaptured by the Habsburg Hungarian army. On June 1553 the Turks occupied the settlement and it was under Ottoman rule untill 1594, when Prince Sigismund Báthory - Prince of Transylvania recaptured it. In 1598 Turks occupied and in 1616 destroyed the fort. The settlement was liberated in 1699 by the Treaty of Karlowitz. At the time of the Turkish wars the settlement and its vicinity were devastated. The settlement was resettled by Romanians and Serbs. In 1739 Serbs leaved the settlement and in 1803 Slovakians arrived. Nagylak was the part of the Csanád county of the Kingdom of Hungary until 1919/1920. It was occupied by the Romanian troops in 1919 and -without the Rlw.St.- it was annexed to Romania by the Treaty of Trianon in 1920. Border-crossing point opened in 6 April 1968  in Nagylak-Nadlac.
Sources: <www.vendegvaro.hu>, <hu.wikipedia.org>, <www.primaria-nadlac.ro>, <vincze.adatbank.transindex.ro>.
István Molnár, 25 January 2006 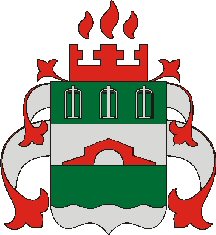