Last month I was in Csorna and I have taken two photos (see: here and here) of the flag of GySEV (Győr - Sopron - Ebenfurth Vasút Rt., or ROeEE (Raab-Oedenburg-Ebenfurth Eisenbahn). This private Railway Corporation is located in Hungary and Austria. It has got two lines: the Győr-Sopron-Ebenfurth line and the Fertőszentmiklós-Pamhagen-Neusiedl am See line.
The flag, which I saw is a vertical only flag. Colours are: Yellow and green. In the 1/3 part of the flag there is the blue symbol of the GYSEV. Gysev homepage is <www.gysev.hu>.
István Molnár, 22 September 2000

This is the flag of Magyar Államvasutak (Hungarian State Railways), which can be seen flying at most stations throughout Hungary
Ferenc Valoczy, 27 September 1999

This is the old MÁV flags, you could see these on the buildings of the stations, but there aren't official from 1999.
István Molnár, 27 November 2000

I have seen this flag in the Hortobágy National Park. In the white field there is the symbol of the HNP. Is it official? I don't know.
István Molnár, 27 November 2000

Here the description of the flag of the Puskás Tivadar Távközlési Technikum in Budapest from <www.puskas.sulinet.hu>:
The background of the flag contains the three Hungarian national colours, with gold braiding on the edges. One side of the flag is the same as the national flag (the coat of arms with the crown on a red, white and green background). The only difference is that the name of the school is embroidered with golden thread around the coat of arms with the crown. On the red background on the left side of the coat of arms the name Puskás is written and on the right side Tivadar. On the lower green background Távközlési Technikum is embroidered also in gold. On the other side of the flag the name Tivadar Puskás, the person giving his name to the school, is embroidered with gold on the red background, and on the lower green background Távközlési Technikum is written. In the middle of the flag there is the shield of the school. On the left side the date of establishing the school (1912-1913) and on the right side the year of the dedication of the flag (1952-93) is written also in gold. The stick holding the flag of the school is red, white and green striped. The flag is made out of silk. Description of the shield of the school:  On the white ribbon with a golden edge above the shield the name of Tivadar Puskás is written in gold letters. The outer curve of the shield is wine coloured with a golden edge. On this curve Távközlési Technikum is written in a circle. In the middle of the shield black and gold pictures are painted on the grey background which symbolise the main activities of the school: a telephone receiver, a radio aerial, an electric tube, a power line with insulation. Below the pictures there is an open book with pictures symbolising the subjects.
István Molnár, 8 March 2001 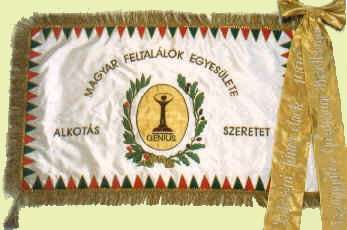 At < http://www.luka-kp.si/slo/medijski-koticek/arhiv-novic/800 > in foreground, flags of the Port of Rotterdam and Hungarian logistics  firm Hungaria Intermodal.
Eugene Ipavec, 12 August 2010

The former burgee of Királyi Magyar Automobil Club was yellow with a blue cross overall, defaced with a yellow disc fimbriated blue, bearing a crowned 'K.M.A.C' initials in red. The burgee featured prominently on the official poster for the 1936 Hungarian Grand Prix.
Miles Li, 30 October 2017

Information on the program to fly Hungarian astronauts to the ISS, likely on a SpaceX Dragon. From the looks of the photo of the flag here, the logo is all white and is placed on a blue background.
Dave Fowler and Zachary Harden, 3 November 2021