Bakonytamási is a village in Veszprém County in Hungary near to Town of Pápa (24 km east) in the Little Hungarian Plains. The village has got 795 inhabitants (1990 census) nearly all of them are Hungarians. Neighbouring settlements are: Gic, Nagydém, Bakonyság and Pápateszér villages.
The territory of the village was inhabited in the Bronze Age. There are two mounds from this ages. The first mention of the village is from 1262. All the settlers of the villages was serf.  In 1910 Bakonytamási was a village in the Pápa district of Veszprém County. Number of inhabitants in 1910: 986; 983 (99,7%) Hungarian and 3 others by mother tongue, 651 (66,0%) Lutheran, 287 (29,1 %) Roman Catholic, 34 (3,4%) Jew and 14 (1,4%) other by religion.
Istvan Molnar, 18 September 2000

On November 2002. the Council of the Community decided on to discontinue the using symbols of the village because they were absolutely wrong by heraldry and didn't represent the past and present of the settlement as required. The council decided on to be make a new Coat of Arms and flag. The council of the community charged Mr. Tamás Mógor designer to design and make the new symbols.
The CoA of the village is a shield divided horisontally and the top field is divided vertically. The first field is divided by red and silver. On the left right field there is a gold wheel. On the bottom blue field there is a sitting silver pelican feeding its three youngs with own blood. The first red-silver field - equal of the right field of the Hungarian CoA - relates to the old Hungarian village and the patriotism of the people of the village.  The gold wheel relates to the first known seal of the village from the 18th century. (The wheel was the symbol of the Káta Clan at the time of the Kings of the Árpád House (10-14th c.), but the connection of the clan and the village is unknown). The silver pelican on the bottom field reates to the devotion and self-sacrifice of the inhabitants of the village in the past. And the pelican is a part of the CoA of the Batthyány of Németújvár family from 1500.  The Batthyány family was the landlord of the village from the 18th century to 1849 (Lajos Batthyány the first Hungarian prime minister's execution).
The flag of the village is blue-white with the CoA. The colours relates to the CoA of the Batthyány Family. Below the CoA there is a gold inscription: BAKONYTAMÁSI. The new CoA and flag will be sanctified in 25 March 2003 on ecumenical ceremony.
Source: Mógor Tamás: Bakonytamási község címerének és zászlójának leírása, 15 March 2003.
Istvan Molnar, 7 April 2003

The flag, the coat of arms and the seal were adopted in 1st April 1999. The vertical flag was the official one.
Istvan Molnar, 18 September 2000 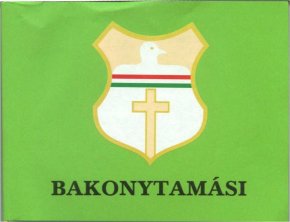 Horizontal flag: only made from paper.
Istvan Molnar, 18 September 2000