The flag of Paloznak - Coat of Arms in the center of a plain white flag is flown in front of the city hall. It is a small community on the north shore of the Balaton Lake (the largest lake in central Europe), in Hungary near Balatonfured, where our family spends one month a year with the grandparents. It is a small village, which just became a city on a south sloping hill with many small wineries. The most popular wine around here is the riesling. Paloznak's only landmark is a small church, which is visible from many miles away, even from the other side of the lake. It is part of the flag as are the waves of the Balaton, the grapes and the hills. There is a very high concentration of the Hungarian "Elite", who own their vacation homes here.
Les Vorosmarthy, 20 April 2001 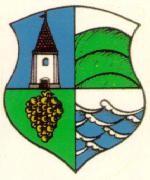