The city of Nahariyya, 25 km north of Haifa uses as flag a blue logo on many different backgrounds. The one on the city hall is yellow but there are also white, orange, green and blue.
Dov Gutterman, 15 April and 15 May 1999

Nahariyya (meaning river of God) is situated on the sea coast (northmost seashore town in Israel) between Acre and the Lebanese border. Est. in 1935 and named after the Ga'aton 'river' that crosses its main street - a very small river.
The municipal emblem was published in the official gazette (Rashumot), YP 1795, 13 January 1972. It replaced the previous emblem of the Local Council Nahariyya, published YP 631, 30 October 1958.
Dov Gutterman, 6 September 2001

I visited Nahariyya on 17 September 2001 and I noticed that the main flags are now blue. There are still flags in other colours but on the main poles at the city entrance and at the city hall there are blue flags.
Dov Gutterman, 23 September 2001

Nahariyya now use almost only blue flags with white outlined emblem even thou that in my last visit I saw also one orange variant.. Vertical flags with color emblem are also used as seen in photo at <uploaded.fresh.co.il>.
Nahariyya's land was bought in 1934 by Yoseph Levi in order to establish a new community by individuals. Dr. Schiffrin, Haifa Municipal Engener suggested the name Nahariyya after the Ga'aton stream that cross it. The community was establiahed on 10 February 1935 and most of the first settlers were Jews from Germany. It became a municipality on 1 April 1961. Pop. 48,200 (2003).
Nahariyya's emblem described at the municipal site: "Nahariyya is situated in the heart of Historical Asher tribe's estate and the emblem of the city combines our historical roots in the Western Galilee and our resurrection in the new era.
Beside the ancient olive tree which is planted between the clods of the fertile soil, and beside of Moses blessing: "Asher - blessed of all sons", which is written in ancient Hebrew script, the water-tower is rising - the symbol of the city and the renewing Hebrew settling. A sun of a new dawn sent its rays which separate between past and present, and spread a joint sky to both. The emblem was design by Ephrayim Haltrecht in 1941"
The emblem appeared on a stamp issued 18 October 1970
The said water-tower can be seen at <www.nahariya.muni.il>. It was built in 1934 and serve today as cultural center.
Dov Gutterman, 27 April 2005 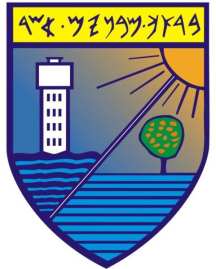