Thika is a market town in Central Province, Kenya, lying on the A2 Road and located about 40 km north of Nairobi on the Thika River at 13 degrees South and 37.55 degrees East. The elevation of Thika is 1420 metres to 1550 metres above sea level, with an average temperature of maximum 25 degrees centigrade and rainfall average of 1020 mm per annum. There are two explanations for the name Thika. One has its origin in the Kikuyu word guthika, meaning "to bury".  During a great drought, the Maasai ventured outside of their normal territories looking for water for their huge herds of cattle. Two rivers pass through Kikuyu land, the Thika and Chania, both providing sustenance for the agricultural Kikuyu.  With this water in contention, and both tribes desperate for survival, they fought a bloody battle that left few survivors. A mound, near Blue Posts Hotel supposedly is where the dead warriors were buried.

The other explanation comes from the Maasai word sika, meaning "rubbing something off an edge".  In addition, the area was originally inhabited by the Akamba tribe. Towards the end of the 19th Century outsiders began to settle in this outpost, a convenient resting spot between Nairobi and upcountry for British settlers.  Europeans and Asians began to stop and remain at Thika, the former setting up farms, and the latter setting up shops. A monument, in the shape of a pillar, was erected by the British in the early 1900s in the central business district of Thika. It commemorates the founding of Thika as a town. The town was given its status by Government Gazette in 1924. Thereafter, it was elevated to a second class municipality when Kenya gained independence in 1963, and the first Mayor was elected in 1968.

Thika Town measures about 93 square kilometres. It has a population of 150,000 at night and 350,000 people, during the day (1999 Census). Many of the people
are employed in the factories according to the municipal website.

The municipal flag is dark green with municipal coat of arms on it. It can be seen in a photo of the Town Clerk here, and the coat of arms are shown on the upper banner of the same page.
Valentin Poposki, 18 Apr 2009 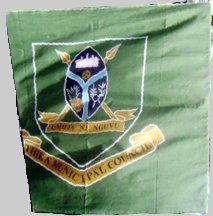 A flag with a slightly different rendition of the badge is shown above.
Vanja Poposki, 16 May 2012