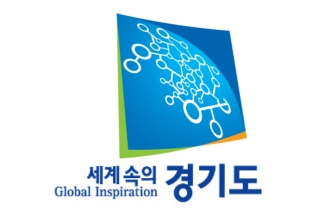 On a recent trip to South Korea I noticed what appears to be a new provincial flag for Gyeonggi-do, the province in northwestern South Korea that surrounds Seoul. On previous trips I had seen that flag, but his time, however, that flag was not to be seen.
Instead, I saw a white flag with a blue and white logo on it and the words "Global Inspiration" in English and Hangul, with the name of the province also in Hangul.
Randy Young, 27 November 2014

Doing some research, I found on the provincial website that Gyeonggi-do has adopted a new provincial logo and motto, which are what I was seeing on the flag:

"Gyeonggi's new symbol represents the ambition, fortitude and resolution of the province to emerge as a leader in a prosperous world.
Slogan of Gyeonggi-do
We are living in the global era in which the ideas and inspiration of each country's competitiveness are ceaselessly interconnecting. Against this backdrop, the Gyeonggi slogan - "Global Inspiration, GyeongGi-Do" - embodies the determination of the province to become the center of Northeast Asia as well as the world with its advanced knowledge, cutting-edge technology, creative thinking and innovative actions.
Logo of Gyeonggi-do
The logo represents the strong network and solidarity of the 31 cities and countries within the province as well as a robust global network. The logo also characterizes dynamics that is reaching out to the world in search of limitless growth potential and opportunities. Furthermore, it reflects the province's ambition to promote co-existence among all peoples, paving the way by first overcoming conflicts in Korea and then expanding to the world.
Colors of Gyeonggi-do
Gyeonggi Blue, the primary color, symbolizes cutting-edge knowledge and technology, creative thinking and innovative actions, while sky blue signifies the province's infinite potential and opportunities. Gyeonggi Orange, one of the two additional colors, expresses the warmth and cooperative spirit of Gyeonggi residents, while, Gyeonggi Green represents the affection of provincial residents for Mother Earth and the environment."

[The first three consonants] of the Korean word Gyeonggi-do, reflects the peace and liberty of the region's people.

The circle, which is red and orange, symbolizes the origin of the universe and also signifies that Gyeonggi is the center of Korea in every aspect of our lives, including politics, economy, culture, and history.

The blue color on top symbolizes the eternal development and growth of Gyeonggi. It is at the head of the global and local movement and is the heart of the 21st century's unified Korea. The white ground symbolizes the fact that the people are descendants of the noble Korean ancestors.