A state of war has existed since 1980 as the Turkish government has repeatedly sought to crush the radical Marxist rebellion of the Kurds. Abdulla Ocalan founded the Partiya Karkeren Kurdistan (PKK, or Kurdish Workers' Party) in 1978.
T. F. Mills, 27 September 1997

One ammendment should be made to the already reported flag of the PKK: this was the flag used between 1995 and 2002. The current flag is this one:
http://en.wikipedia.org/wiki/Kurdistan_Workers%27_Party#mediaviewer/File:Flag_of_Kurdistan_Workers_Party_(PKK).svg
(Source: http://en.wikipedia.org/wiki/Kurdistan_Workers%27_Party  )
One can see the current flag in the following pictures:
- http://www.kizilbayrak.net/uploads/tx_news/kck-genel-kurul-AA.jpg (second flag from left to right, source: http://www.kizilbayrak.net/rss/kck-sisteminde-degisiklige-gidildi/  )
- http://www.bakurd.com/wp-content/uploads/2013/10/kongra-gel.jpg (first flag from left to right, source: http://www.bakurd.com/?p=4450 )
The PKK (and its affiliated organizations) is considered a terrorist group not only by Turkey ( http://www.mfa.gov.tr/pkk_kongra-gel.en.mfa ) but also by several other countries. In this picture, it shows its support to the Farc ( http://www.hezenparastin.com/eng/images/farcli_yoldaslar.jpg  , first flag from left to right ), another terrorist organization, from Colombia.
Esteban Rivera, 14 September 2014

PKK changed its name in 2002 to Congress for the Freedom and Democracy of the Kurds (KADEK) and adopted a new flag (red with a sun in canton and a red five pointed star within. KADEK was enclosed in European list of terrorist and in April 2004 follow United States (of course this a political view and PKK and KADEK are not terrorist but self defending).
In October 2003 KADEK was the base of the mass organization KONGRAGEL (Kurdistan Peoples Congress) and in April 2004 United States declared them as terrorist organization (together KADEK). Kongragel flag you pointed in your message
Kongragel joined in 2005 a wider new mass organization called Koma Komalen Kurdistan (Confederalism in Kurdistan) that declared a cesez le feu in 2006 and renamed Koma Civakên Kurdistan (Peoples Confederation of Kurdistan). The flag (under both names) is green with a yellow sun in the centre and a red five pointed star within. As far I know is not classified as terrorist organization. A legal party called Democratic Solution for Kurdistan is acting in Kurdistan-Iraq using (from 2009) the same flag but changing the star for a rose as you can see in http://ca.wikipedia.org/wiki/Partit_de_la_Solució_Democràtica.
The flag that you believe is the current one for the PKK, in fact is not. PKK today don't exist. The flag is, and always was, the flag of Eniya Rizgariya Netewa Kurdistan (Kurdistan National Liberation Front) a frontal organization of PKK and some supporters out of the party, religious, leftist but not communist, etc... all pople or groups for the national independence. Their main task was give political support to Hêzên Rizgariya Kurdistanê (Armed Brigades of Kurdistan) the armed military wing of the PKK.
Jaume Ollé, 14 September 2014

Variants of the flag of PKK

These variants of the PKK flag have been reported in Gaceta de Banderas [ban] and Flaggenmitteilung [fmL] #117, repectively.
Jaume Ollé, 04 October 1997

A.Basov of Minsk told me he saw many times the flag of Kurdish nation in Russia: a red field with a red five-pointed star on a yellow many-pointed star.
Victor Lomantsov, 07 July 2003

I've encountered this flag on the Internet as the flag of PKK (or KADEK after changing the name). That explains why Kurds use this flag!
Onur Ozgun, 07 July 2003

Red star in center of 21-pointed golden sun disc in the upper hoist of a red flag. This seems to be a variant of the original PKK flag, since it has the star and the red background of the PKK original flag but also the sun disc of the Kurdish Regional Government in Iraq.
Eugene Ipavec, 03 September 2005

Other PKK-related flags can be seen in this video interview with Murat Karayilan, from elapsed time 0:44 onwards, as well as other flags in this video.
Esteban Rivera, 29 August 2010

Koma Civakęn Kurdistan (KCK), a Kurdish organization founded on 20 March 2005 by Abdullah Öcalan as Koma Komalęn Kurdistán (KKK) and renamed in 2007. The "Declaration of Democratic Confederalism in Kurdistan", issued by Öcalan on 20 March 2005, prescribes the flag as "on a green background a yellow sun with a red star".
Source: http://www.freemedialibrary.com/index.php/Declaration_of_Democratic_Confederalism_in_Kurdistan
Ivan Sache, 29 August 2010

A news photo at Yahoo.com shows a PKK flag, green, with a 40-rayed yellow sun disk (20 long, 20 short) and a red star at its center. The photo is captioned:
"A demonstrator flashes a V-sign before outlawed Kurdistan Worker's Party flag during the 'democracy and peace' demonstration organised by local non-governmental groups and pro-Kurdish parties in Diyarbakir, Turkey."
Eugene Ipavec, 23 November 2005

The depicted flag was shown in a rally of Kurds in Brussels on 1st October 2005, reported by euronews.net. The Kurds were protesting against the efforts of Turkey to join the EU. The flag was shown together with the red flag with green-edged yellow circle including a red 5-point star. So I think it is the flag of another Kurdish Socialist group.
Description of the flag:
Ratio unknown. The flag is rectangular. There is a yellow (FIAV-Code Y) sun on a plain green (FIAV-Code V+) ground. The sun includes a red (FIAV-Code R) 5-point star.
Klaus-Michael Schneider, 30th October 2005 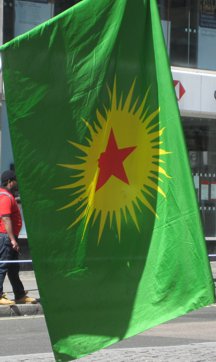 On May 1 this year, when Communists and socalists often hold events, I happened to be at Trafalgar Square in London, and I photographed someone carrying a flag I hadn't seen before.
The version I photographed is a combination of above flags, but it has 42 points, alternating long and short. As far as I can tell from the photo, the orientation of the red star and the long points of the yellow star matches your third flag, i.e. the former has one point straight up and latter has one straight down.
However, it looks slightly inexact, as though either it was at least partly handmade or else there is some deliberate slight asymmetry. And since it's being hand carried, the "up" direction isn't 100% clear.
The colors look closest to the third one on your page.
Mark Brader, 10 July 2013

Notice a nice optical illusion - the yellow rays spin around the red star when you do. And to think some of you think that we needed to modernize our layout - we are at the forefront of digital graphic effects here!
Peter Loeser, 29 July 2013 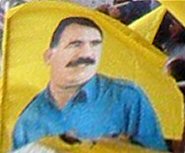 I found this image on WikiPedia of some Kurdish demonstrators in London. The other flag bears the image of the captured leader of the PKK, Abdallah Ocalan.
Esteban Rivera, 03 September 2005

Another picture (upper left at http://www.rfi.fr/actufr/articles/054/article_28600.asp) shows this flag. The report (10 June 2004) concerns cultural and political developments in Turkey positive to the Kurds.
Jan Mertens, 04 September 2005

This flag, along with the 3rd variant of the PKK flag are seen in this picture taken during what is now known as the "February 15, 2003 anti-war protest", "a coordinated day of protests across the world against the imminent invasion of Iraq. Millions of people protested in approximately 800 cities around the world. According to BBC News, between six and ten million people took part in protests in up to sixty countries over the weekend of the 15th and 16th; other estimates range from eight million to thirty million".
No further reference of the origin of either the Öcalan flag or the 3rd PKK variant flag is mentioned.
Esteban Rivera, 29 July 2008 Another flag (photo) may already have been reported (horizontally divided red above green, a large yellow sun in the centre).
Jan Mertens, 04 Sep 2007

But it would have to have been the other way up - green over red. And looking closely at this capture, there is a hint of what might be the red star in the middle of the yellow sun.
I note that this flag, and the one which Ivan cites, have the sun with alternating long and short rays. The well-known flag used by the Kurdish Regional Government in northern Iraq has a sun with rays all of the same length. I wonder whether this is a design change for aesthetic reasons or whether it has symbolic/political significance.
André Coutanche, 29 August 2010 It is probably a flag of the PKK, because on that photo Abdullah Öcalan stands right in front of the flag.
Description: In the centre in a light (probably yellow) field is a dark (probably red) 5-point star surrounded by a darker(probably green) garland of grain. The star is superimposed by a falcon or hawk with two crossed MPs at his feet.
Source: Erich FEIGL: "Die Kurden", ISBN 3-8004-1322-1, p.246
Klaus-Michael Schneider, 14 August 2008 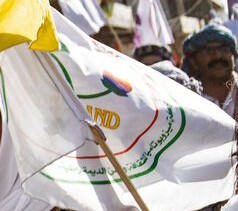 Flag related to PKK with face of Ocalan and a flag of the KKK (Koma Komalęn Kurdistan /Kürdistan Demokratik Konfederalizm) at each side.
Jaume Ollé Casals, 06 July 2012

The stars on the GIF image shall be rotated for 180 degrees in order to have the same position as those from the photo.
Tomislav Todorović, 06 July 2012

Here's another image of a KKK/Öcalan flag here. (Source: http://peaceinkurdistancampaign.com/tag/newroz/ ).
We could use this image, which IMHO is a little bit better than the one we currntly have displayed.
Esteban Rivera, 01 July 2014

Yesterday on RCN local news channel a news report on the ongoing conflict in Iraq and Syria (most likely produced for VICE news outlet) showed combatants of the PKK with several flags and pennants. 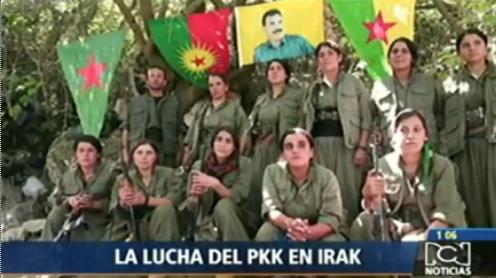 image located by Esteban Rivera, 14 September 2014
(screenshot of the news broadcasted by RCN on September 13, 2014).

The report is titled "La lucha del PKK en Irak" (The PKK's struggle in Iraq, in Spanish) In this picture can see from left to right, the following:

1) UFE (A green pennant with a red five-pointed star in the middle). This same pennant can be seen in UFE 14-45, second from left to right).
It also can be seen here (second flag from left to right. Source), and it bears an important fact to highlight, and that is: that also the YPG (Yekîneyên Parastina Gel, People's Protection Units) which is the yellow Pennant with a red five-pointed star, has also a flag, and not only its pennant as previously reported by Hoang Nhan Nguyen on a video by VICE news showing several UFE's).

2) Kongra-Gel (Kongra Gelê Kurdistan, Kürdistan Halk Kongresi) - Kurdistan People's Congress (variant). This flag has the same pattern as the already reported KPC flag but has a red five-pointed star in the middle of the yellow sun.

3) Leadership flag (often called Öcalan flag).  This flag is called the leadership flag (as pointed out by Polat C. Akkas on September 26, 213). My conclussion is that it is called as such because it portrays its leader's face (Abdullah Öcalan, a.k.a. "Apo").