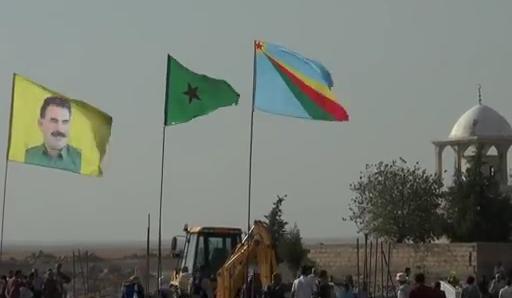 Help me to identify two flag on the image taken from the footage of VICE News.
Hoang Nhan Nguyen, 01 July 2014

Well, they're definitely Kurdish. The one on the left is a portrait flag of PKK leader Abdullah Ocalan. The middle one appears to be a variant of the green flag of its affiliate the KKK, but without the yellow sun on which the red star is usually placed. The right one is a novelty, but it has the KKK sun+star in the farthest corner of its canton.
Eugene Ipavec, 01 July 2014

I have several questions regargding that image: 1. Can you provide the original link of VICE news that Mr. Nguyen Hoang Nhan mentions? 2. I see an Abdullah Öcalan flag (first flag from left to right, like the ones post here as the Öcalan flag. It is possible that the other two flags may also be of Turkish origin, rather than Syrian, but do we have the location of where this picture was taken? Perhaps if we identify the place we may have a better chance of identifying the other two flags.
Esteban Rivera, 01 July 2014

The video you mention is taken on "Syrian Kurdistan or Western Kurdistan (Kurdish: Rojavayę Kurdistan), also commonly referred to as simply Rojava meaning the West in Kurdish, is a de facto autonomous region in northern and north-eastern Syria".
Regarding the flags in this video, they are the flags of the "Democratic Union Party (Kurdish: Partiya Yekîtiya Demokrat, PYD; Arabic: حزب الاتحاد الديمقراطي‎ - Ḥizb Al-Ittiḥad Al-Dimuqraṭiy) ) is a Syrian Kurdish political party established in 2003 by Kurdish activists in northern Syria. An affiliate of the Kurdistan Workers' Party (PKK) and a founder member of the National Coordination Body for Democratic Change, it is described by the Carnegie Middle East Center as "one of the most important Kurdish opposition parties in Syria". It is said to control a number of towns in northern Syria." Sources: Democratic Union Party
The PYD "is basically ruling over the Northwestern part of the country. Since the start of the Syrian Civil War in 2012 the PYD has quietly constructed its own government in Syria including an army (YPG), police force (Asayis), and even conducts it's own foreign policy." Source: Rise of the PYD in Syria.

So the flags in the Youtube video that you mention from VICE news, are:

The YPD in turn responds to the Kurdish Supreme Committee (Kurdish: Desteya Bilind a Kurd) is a governing body of Syrian Kurdistan, which was founded by the Kurdish Democratic Union Party (PYD) and the Kurdish National Council (KNC), following the signing on 12 July 2012 of a cooperation agreement between the two parties in Hewlęr, Iraqi Kurdistan under the auspice of the Iraqi Kurdistan President Massoud Barzani. The member board consists of an equal number of PYD and KNC members. Source: Kurdish Supreme Committee. For additional information go to the official website of the PYD.
Esteban Rivera, 03 July 2014 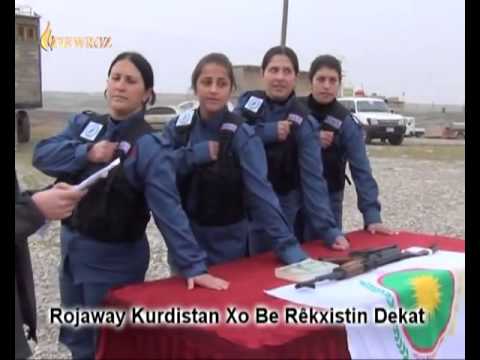 I forgot to mention one more flag featured in this video (3:26 and 4:38). It is the flag of the Kurdish Supreme Committee. They even had a poll or flag contest: "On its official Facebook page, the Kurdish Supreme Committee (KSC) posted a number of sample flags and logos as potential symbols to represent the unity of Syrian Kurds and different political factions working together under the umbrella of the committee."
Sources: Web Archive File, The Proposals, Northern Iraq Forum and this YouTube video.
It seems that this flag is actually the Asayish (Police Force) flag. So this flag remains an UFE.
Esteban Rivera, 03 July 2014

The New York Times reported on its online version on September 11, a flag of an anti-ISIS group, during the siege of Amirli. The picture caption reads: "Shiite militias last week after helping free the town of Amerli in northern Iraq from an ISIS siege".
The main article deals with the "strange" and rather "odd" alliances that this group (ISIS) has brought together against it.
The flag shows three men (most likely important figures in Islamic religion, maybe prophets or Imam's, since they seem to be holding books, scriptures and showing all sorts of sacred beliefs in this flag).
Since there are so many belligerents in this particular battle as members of an informal coalition of ground forces battling against ISIS [Iraqi Turkmen Front, Special Groups (which
is the term used by the US to identify Iran-backed Shia paramilitaries in Iraq) such as Promised Day Brigades, Asa'ib Ahl al-Haq, Kata'ib Hezbollah, Badr Brigades, and Peshmerga (which
are the armed forces of the Kurdistan Regional Government semi autonomous Region].
Also, since Ameril (Amirli) is predominantly populated by Turkmen, it could indicate that this flag is of Turkmen origin.
Esteban Rivera, 13 September 2014

The three flags featured in this entry are also seen in this other section "Unidentified Kurdish Flags" as well and even (incorrectly displayed here, a mistake which I will approach in another follow up message), have been positively identified.
From left to right, the flags are:
1. Öcalan (leadership flag), which is part of the PKK.
2. YPJ ( Women's Protection Units or Women's Defense Units (Yekîneyên Parastina Jin‎, YPJ) (official website) which is part of the Syrian Democratic Forces. A GIF of the flag (which is actually a pennant) is seen here (source)
3. Kongreya Star (English: Congress Star), founded in 2005 under the name of Yekîtiya Star (English: Star Union of Women), a confederation of women’s organizations in Rojava, Syria. The organization focuses on organizing women's communes which focus on economic opportunity and development, consciousness-raising and self-defense for women. Ideologically they are within the wider framework of the Democratic Confederalism (also known as Apoism, or democratic federalism) modernization movement. "Yekîtiya Star has established several academies, of which Yekîtiya Star Academy was founded in 2012 and provides instruction
through the framework of Jineolojî (Kurdish for "women's science"), a term coined by Abdullah Ocalan. The Academy offers an introduction to Jineolojî, an exploration of the economy from a feminist lens in which women are seen as central actors in the economy, civics as practiced in Rojava ( ) as well as other subjects". An image of the flag is seen here. (source)
Esteban Rivera, 13 March 2018

In these phrases, the word "star" is borrowed from English, although Kurdish for "star" is the very similar "stêr / ئە".
I'd say that the term coined by Abdullah Ocalan is a Hellenic erudicism akin to the names of many medical specialties and academic disciplines, apparently "gyne+(o)+logy", which would trivially yield "Gyneology" in English.
António Martins-Tuválkin, 14 March 2018