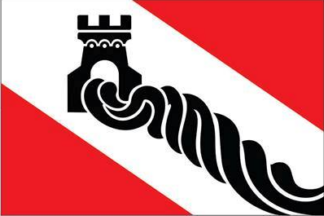 The flag of Demir Hisar, designed by the heraldist Stojanče Veličkovski, was inaugurated on 2 September 2015 (photos).

Wikipedia (Macedonian edition) once showed, without further detail and source, the flag of Demir Hisar as red with the municipal coat of arms placed near the top of the flag.

Sopotnica (2,319 inhabitants in 2002) is located on the Plakjenska mountain and in the valley of Crna river, that is between Ohrid and Kičevo.
According to Bostjan Burger's Slovene-English dictionary, Sopotnica means "a stream where are waterfalls" (old name) and is cognate to sopot, sapet, supot, the old name for "a waterfall", usually stream where are whitewaters or small waterfalls. There are indeed several places (city, rivers) named Sopotnica, in Slovenia, Croatia, Bosnia, Kosovo, Bulgaria and Poland.
The Sopotnica mine was the subject of the industrial film Demir Hisar Mine - "Sopotnica" (1971, 14 minutes), created in standard technique, with sound, in black and white and 35 mm. The film presents the process of opening the new mine, the stages of mounting of the new lines and the new miner's settlement.
Sopotnica was incorporated into the municipality of Demir Hisar in 2004.