Legislation on the local subdivisions

According to the legislation on the local subdivisions (1997) every municipality is entitled to adopt its own coat of arms and flag. Therefore, all municipalities that have adopted a coat of arms, as a rule, adopted also a flag. In most cases it was a monocoloured flag (mostly red) with the coat of arms in the middle.

Article 10.
Coats of arms and flags of the municipalities.

Use of the municipal flags 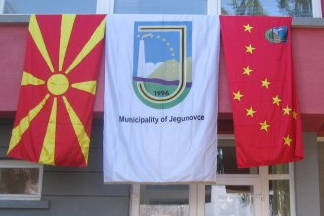 Flags displayed by the Library of Jegunovce - Photo by Valentin Poposki, 24 November 2009

The Library Building in Jegunovce displays three flags - the North Macedonia flag, a Jegunovce "banner" and the Jegunovce municipal flag. The banner is white with the municipal coat of arms and the writing "Municipality of Jegunovce" below.

My attempt to explain this odd practice is the following. Like in most other places in former Yugoslavia all public buildings are equiped with three flag poles in front of them (in Socialist Yugoslavia, they were used for the flags of Yugoslavia, of the Republic and of the League of Communists of Yugoslavia.
Nowdays, the hoisting of only the national and municipal flags would let one pole empty, which is apparently frequent in many parts of former Yugoslavia, so someone in North Macedonia invented a solution. They would add a third flag showing the local municipal coat of arms on a white field. This may indeed be a very unusual solution if the local flag is itself showing the coat of arms itself, but this may not be the case for many municipal flags.

There are currently 80 municipalities (opštini) in North Macedonia, as listed on the website of the Ministry of Local Self-Government (page no longer online). The Law on Territorial Organization passed on 11 August 2004 and published in the official gazette on 16 August 2004 abolished the previous 123 municipalities established by the Law on Territorial Division in September 1996.

An earlier page of the website of the Ministry of Local Self-Government (no longer available) showed the flags of some municipalities. Some of those municipalities have lost their status in August 2004 or MArch 2013 and it is not known if they still use the flags shown on the source website:

Article 2.3 of the ZELS by-laws (English version), adopted on 27 October 2004, states thet the name of the organization of the Macedonian municipalities is "Association of the Units of Local Self-Government of the Republic of Macedonia - ZELS".

The emblem of ZELS is made of a central golden disk, surrounded by a 10 rays each made of three, smaller yellow disks.