Flag of Tetovo
Left, after a photo of the flag - Image by Ivan Sache, 11 June 2006
Right, as shown on the Macedonian Ministry of Local Self-Government website (page no longer online) - Image by Mello Luchtenberg & António Martins, 9 April 2007

The municipal flag of Tetovo, as shown on photos available on the municipal website, is in proportions 1:2, horizontally divided red-black-yellow (3:2:1) with the municipal coat of arms placed in canton.
The flag is shown on the Macedonian Ministry of Local Self-Government website (page no longer online) without the coat of arms.

Tetovo, located not far from Kosovo and Albania, is one of the most important and revendicative Albanian-speaking towns from North Macedonia. Several incidents caused by hosting the (then banned) Albanian flag on the town hall and the Albanian-speaking University were reported.
I won't be surprised if the municipal flag were intended to symbolize a compromise between the Albanian majority (red and black) and the Macedonian minority (yellow). Stretching the red colour over the half of the flag could also symbolize equality between both communities, since red is dominant in both Albania and North Macedonia flags.

The town of Džepčište (7,919 inhabitants in 2002; 32 sq; km) is located just northeast of Tetovo, not to be confused with a much smaller Džepčište in the central part of the western border with Albania.
Džepčište was incorporated into the municipality of Tetovo in 2004.

The local architect Simeon Zlatev claims to own the smallest ethno-museum in the world. Quoting Vreme, 30 April 2004:

The museum has a fund of 1,150 items, which come from all parts of Macedonia, put at a space of 7.2 sq. m. Due to the limited space, the museum can host only one visitor. The largest part of the displayed materials date from the end of the 19th and the beginning of the 20th century, but there are also fragments of ceramic items, which are 5,000-8,000 years old. The mini-museum content comes as a result of the collecting and studying of the ethno and paleo-items, to which Zlatev dedicated 30 years of his work.
The display is divided according to the type of material the items are made of. The visitor has a chance to see old books and writing sets that had been used in the past, coins and bank notes, as well as items for money collecting. The collection also includes applications, fibula, guns, tools, which had been found at some of the archaeological sites, and date from the early antique until the late Middle Ages. Glass and porcelain items are presented as a special entirety. Copper and brass items, with rich relief decorations, are largely displayed. The museum also has a manual stone mill, jewelry and religious relics, folk costumes, old photographic equipment, lambs etc. There are also numerous household items, as well as set for smoking and keeping tobacco.

The flag of Džepčište (Macedonian Ministry of Local Self-Government website, page no longer online), is in proportions 1.2, red with the municipal emblem shifted to the hoist. On the emblem, the yellow device is the helmet of Skanderbeg.

The municipality of Šipkovica (7,820 inhabitants in 2002; 145 sq. km) is located c. 10 km northwest of Tetovo. Šipkovica was the headquarters of the Albanian rebels during the 2001 conflict. Ali Ahmeti's National Liberation Army controlled a significant part of north-western North Macedonia and threatened the town of Tetovo. After the Ohrid agreement, Ahmeti announced in Šipkovica the disbanding of the NLA and the handing over of their weapons to a NATO force (operation "Essential Harvest").
Šipkovica was incorporated into the municipality of Tetovo in 2004.

The flag of Šipkovica (Macedonian Ministry of Local Self-Government website, page no longer online), was in proportions 1:2, red with a black device in the center.
The device is made of one broad vertical stripe and three narrower horizontal stripes equally spaced. The emblem might suggest the initial of the name of the city, the Cyrillic letter Ш, looking like an" E" rotated 90 degrees, and is also a stylized representation of the Albanian double-headed eagle (whose explicit representation on the flag was not allowed).

Flag of the State University of Tetovo - Image by Ivan Sache, 19 October 2005, after the University website

The flag of the State University of Tetovo is horizontally divided red-yellow with the emblem of the University in the middle. The Albanian-speaking University was the place of several incidents caused by the hosting of the Albanian flag. The situation seems to have calmed down and the University has now a trilingual name, as shown on the emblem placed in the middle of the flag:
UNIVERSITETI SHTETËROR TETOVËS (Albanian, top)
ДРЖАВЕН УНИВЕРЗИТЕТ ВО ТЕТОВО (Madedonian, left)
STATE UNIVERSITY OF TETOVO (English, right) 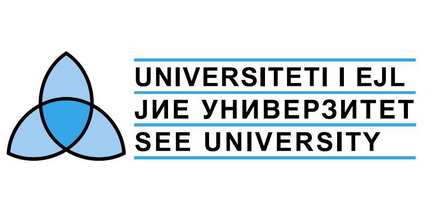 Flag of the South-Eastern Europe University - Image by Valentin Poposki, 5 July 2006, after the University website