Den Haag or 's-Gravenhage (The Netherlands)

Seat of Zuid-Holland province, seat of the Government of The Netherlands

Number of inhabitants (1 Jan 2003): 458.909; area: 85,50 km². Settlements: Den Haag Centrum, Escamp, Haagse Hout, Laak, Loosduinen, Scheveningen, Segbroek, Ypenburg/Leidschenveen.
Den Haag is the capital of the Netherlands, and of Zuid-Holland province. It is unclear what its official name is. The more dignified name is 's-Gravenhage (the court of the count), while the colloquial name is Den Haag. In the 1990's the municipality adopted the name Den Haag, but this was not officially confirmed. However the Staatsdrukkerij (national printing office, SDU) uses the name of Den Haag, so I have followed that.

Another question is whether Den Haag is a city or a village. The homepage of the municipality has devoted a page to it, which boils down to the fact, that if the son of Emperor Napoleon Bonaparte would marry in Den Haag it would be the "bonne ville de La Haye". Since that never happened Den Haag is still a village - which is a very trivial fact as the Dutch constitution makes no distinction any more between cities and villages since 1848. What counts is that Den Haag is a municipality, and equal in greatness to illustrious names as Schiermonnikoog and Gulpen-Wittem :-)

Den Haag's flag-history is described in Sierksma's Nederlands Vlaggenboek 1962 [sie62]:
Description: Two equally wide horizontal stripes of green and yellow.
This flag was adopted by municipal resolution on 2 Dec 1920, and confirmed, after the colors black and yellow had been used for some time. In March 1857 the Mayor informed the Minister of Interior Affairs that on special occasions the flag of yellow and black was used. Now the municipality has revived an older tradition: local letters in Den Haag had been enveloped by green-yellow ribbons. Moreover there are images of the municipal arms, which are divided golden and green.

The national capital of the Netherlands is Amsterdam. Den Haag is "only" the seat of administration and the government. Amsterdam has been the capital for about 200 years. The separation of administrative center and capital city is pretty much unique to the Netherlands. It is said that laws are made in Den Haag and that everything *not done* is being practised in Amsterdam.
Jarig Bakker, 18 Feb 2006 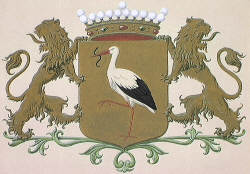