Jan Mertens sent me an image from this website - to wit of the Roeiers Vereniging Eendracht (Rowers Association "Unity") in Rotterdam, the tiny port connected to the world by the Kostverlorenvaart in Amsterdam.

This RVE was founded in 1895 by 5 persons owning each a rowing boat. At present the association is still in existence, with 300 members and 54 motorboats, adapted to modern exigencies of work in a harbour. Members do all kinds of jobs, like piloting, mooring large ships, transport of emergency crews, etc, and all are qualified shippers.
That can be read (in Dutch) at this website, where the photo-sections also show the Association's flag, officially belonging to the Koninklijke Roeiers Vereniging Eendracht (KRVE), as it got its predicate "Koninklijke" (Royal) in 1995 at the celebrations of its century.

The flag is in the colors of Rotterdam: horizontal green-white-green, with on white shaded "K.R.V.E.", preceded by a "harpje", (harp).
Jarig Bakker, 18 Jul 2006

EFM Verzekeringen, a Dutch insurance company mainly active in inland shipping, is presented here.
Not mentioned is 1999, the year in which ‘Eensgezindheid’ and ‘Friesche Maatschappij’ merged to form EFM Verzekeringen.
A large Eensgezindheid pennant was offered on Marktplaats (Dutch auction site) this year: this was no. 147947207, accessed 12 Feb 2008, put up by “skipvlag”.  The largest of three measured 0.80 [m] by 2.00 [m].
Orange pennant with name in white “eensgezindheid” (lower case) parallel to the hoist; also bearing – right next to the name - a large white disk with a stylized sky blue anchor made up of stripes; from the disk issues a sky blue stripe gradually growing smaller, coming together with the orange segments at the pennant's end.
The similarities in design with the EFM pennant are clear (EFM's colours however rather reflect those of Friesche Mij.).
Jan Mertens, 13 May 2009

An insurance firm comparable to Oranje is EFM Verzekeringen, meaning that this firm is above all interested in maritime insurance; has a long history; has a lot of faithful customers flying the company flag.  EFM is located at Meppel, on the Meppelerdiep which is a small river flowing out into the IJsselmeer, the former Zuyderzee.

According to the company website (watery introduction!), the firm was the result of a merger between ‘Eensgezindheid’ (“unanimity”) at Hasselt, founded 1882, and ‘Friesche Maatschappij' (“Frisian company”) at Heerenveen, founded in 1837. Both firms offered mutual insurance to their members, bargemen and shippers.

A long blue triangular pennant with a red hoist, a narrow white stripe between them, has its blue fly traversed by a white stripe getting narrower towards the point; centred on the white vertical dividing line is the company emblem, a blue disk containing three stylized white waves, surrounded by a white ring; to the right of the disk, taking up most of the remainder of the pennant and placed in front of the tapering white line, are the stylized (italic, lowercase, and fimbriated) red company initials ‘efm’.

The pennant can be seen on the ‘Deo Confidentes’ and on the ‘Fortuna’. These are but two examples out of very many.
Jan Mertens, 27 May 2006

However, there also was a rectangular flag of Efm verzekeringen: 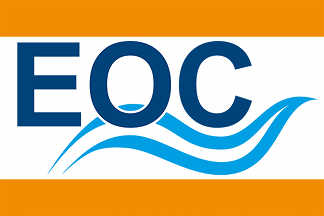 In the absence of a real company website not a placeholder, information on Dutch firm Eurokor has to be pieced together – Quoting from rotterdamportinfo.com:
“Eurokor Logistics is an independent shipping and forwarding agent specialised in the handling of dry and liquid cargo to and from European destinations and origins.”  Eurokor is also listed as a barge operator, which then would be Eurokor Barging.
Established at Ridderkerk to the S.E. or Rotterdam, there is at least one office abroad namely Antwerp.
The company logo consists of a white diamond bearing red initials “EB” (without serifs) within a blue border, and said border on its left side accompanied by a blue chevron, parallel to it.

EWT or Europese Waterweg Transporten BV, Brielle near Rotterdam (i.e. European Waterway Transports) is yet another firm no longer in existence but featured in “Duwvaart” by Jansen & Van Heck (1988) pp. 36-41.
EWT was founded in 1968 by Handels- en Transport Maatschappij “Vulcaan” (founded 1910) and Nederlandse Rijnvaart Vereniging (1920) to carry various dry bulk goods.  Some vessels were brought in by both companies, others were specially built but of course Jansen & Van Heck would concentrate on push-tow navigation.
The German steel concern Thyssen always was an important customer causing important traffic between Rotterdam and the Ruhr area. However from about 1986 a decline in bulk transportation (ore, coal, etc.) led to the sale of a number of older barges.  Another negative factor was the competition of boats under the Luxembourg flag.  Finally, in 2003, ThyssenKrupp Veerhaven (itself the result of a merger) took over EWT already familiar, of course, with working for Thyssen.
Sources: above book plus this webpage (and similar ones).
“Duwvaart” shows the house flag in b/w and describes it as being white with a (light, jm) blue “vignette” being a sort of stylized ‘V’ shape lying on its side and also put on funnels:
Perhaps this is not significant but you can see that the horizontal edges of the logo are centred in respect to the flag’s whereas Jansen & Van Heck shift it towards the hoist.
Jan Mertens, 4 Mar 2006

From this website, spotted by Dov Gutterman:
Euro Rijn B.V. is a company based in Moerdijk, Noord-Brabant, with subsidiary in Dortmond, Duitsland, specialised in inland shipping.
Flag: yellow with a bright blue hoist with EURO in white in a vertical row, shifted a bit to the fly; after the R a horizontal short bright blue stripe charged with white letters "IJN". In the fly a black anchor with a blue rope tangled around it.
Jarig Bakker, 29 Oct 2003