A photo on the Vlootschouw site shows an unusal flag on the fishing boat, ‘ZZ-19 Nehalennia’, easily identified - thanks to the layout of these pages - as belonging to the Dutch shipbuilding and repair company, Machinefabriek (“machine factory”) Padmos based at Stellendam (Goeree-Overflakkee) and Bruinisse
(Schouwen-Duiveland), Zeeland.
Company site.

Some history and general information gleaned from these pages: founded in 1930 by Mr Padmos as a repair workshop for the fishing industry eventually leading to the establishment of a winch factory at Bruinisse in 1964. Building fishing vessels started in 1955. Moved activities to open sea shore because of the Delta Works (dams); a floating dock was acquired. Mitsubishi marine diesel engines dealer since 1973.  Still a family-led business.
Under ‘Newbuilding’ see descriptions of specialized fishing vessels such as the "eurobeamer" and the "beam trawler".  Other kinds of ship built are tugboats and survey vessels.  ‘Shipaccessories’ lists various sorts of equipment for fishery.
In fact Padmos consists of three companies, the works at Stellendam and Bruinisse respectively plus ‘Dokmij’ which relates to the drydock I am sure.

On the Vlootschouw page we see a yellow flag with a white disk containing the company logo in blue; there is also a white stripe near the bottom mentioning ‘PADMOS’ in blue.  I could be mistaken but it seems as if the letters on the flag are in the same font as that used on the Padmos home page.
Jan Mertens, 11 Jul 2006

(cropped image from original picture taken by me at Neuchâtel, Switzerland, on November 3, 2011 at the Marine Services Loisirs port.
Esteban Rivera, 31 Jan 2017

Pedro boats is a dutch company that manufactures luxury steel motor boats and it was established more than 40 years ago. (Source: http://www.pedro-boat.nl/) Its flag is the logo over a diagonal red (two stripes), white (three) and blue (two) diagonal stripes flag, as seen here. (source: http://www.bateaux24.com/chantier-naval/pedro/?page=2

Image from the flagchart "Vlaggen in de haven van Amsterdam" (flags in the harbour of Amsterdam), no date - Phoenix Lijn - ship "Phoenix" a line-service to Great Britain, cargo handled by W.F. Kampman's Bevrachtingskantoor, Amsterdam.
I assume it is (was?) Dutch, but I'm not 100 % sure. A blue flag with an orange diamond charged with a blue capital P
Jarig Bakker, 6 Jul 2004

My father (a passenger of the Phoenix in 1953) believes that the 'Phoenix' company was started up by his grandfather (my great-grandfather), Pieter Cornelis Pieters, as a result of a 'difference in opinion' with regards to the running of the existing family business, another shipping line you have documented, 'Hudig and Pieters'. The creation of the break-away Phoenix line was thought to have caused some tension within the family at the time. PC Pieters found himself with the contacts no doubt thanks to him being the Director of the London-Rotterdam Maritime Agency Ltd based in London amongst other posts in the UK. So although he was a Dutchman, PC Pieters (Partner in Hudig & Pieters for a period) remained in the UK with his wife and three children until his death. The running of daily operations was consequently taken over by PC Pieters' son, William (Bill) Ludo Pieters. Presumably this was sometime before 1943 (PC Pieters passed away in Kent, UK on the 17th November 1943).

I have a copy of a family book, Die Familie Pieters, published in 1956 (in Dutch) as a limited edition to commemorate 100 years of Hudig & Pieters. I also hold the English translation of that book. The book itself is an in depth look at the history of the company focussing on each generation of the Pieters family directly involved with Hudig and Pieters. I notice that in contrast to the 'H&P' detailed on your Hudig and Pieters houseflag, those letters were not commonly displayed on the flag elsewhere.
Certainly they do not appear on the flag displayed on the front cover of the family book nor on other commemorative items (such as a dinner set). Last year I met with the last managing partner of the Hudig & Pieters firm (prior to its merger(take-over) by Dammers in 1970), Ludovicus Johannes Pieters. The elderly LJ Pieters lives in Rhoon, near Rotterdam - he still flies the Hudig & Pieters houseflag at his home (see photos attached - also no H&P displayed(?)).
Rohan Tomas Lyall-Wilson, 16 Aug 2006

Information on Company site of Phijffer, Dutch inland navigation firm:
Founded in 1924 by A.A. Phijffer, this Nijmegen-based company is active in freighting loads of all kinds (sand, gravel, containers, materials destined for recycling, etc.).  According to the site, the vessels in question have capacities between 400 and 2000 metric tonnes.  Phijffer also ensures transhipment and is a sand and gravel supplier.

Some vessels are shown flying the Phijffer flag and others as well but…these are unrecognizable or unknown to me.

The house flag is simply light blue with the name ‘PHIJFFER’ on it in white serifless letters, filling out one third of the field.  One interesting detail though: the ‘IJ’
digraph is rendered in a form often seen in Dutch upper case letters, the ‘I’ being smaller and placed above the leg of the ‘J’.
Jan Mertens, 17 Jun 2006 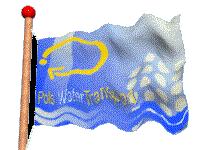 This page offers some basic information on Pols WaterTransport, a Dutch inland navigation company based at Capelle a/d IJssel: As the name says, Capelle is on the River IJssel near the place where it flows into the Nieuwe Maas River where Rotterdam is situated.
Presented on the page is a vessel specialized in transporting industrial waste and sediment; also more common goods such as sand, construction materials and the like. It seems to fly the house flag. Flying on the site, captured and put above, said house flag is rather elaborately designed.
Basically blue, in the upper hoist it sports a yellow arrow, curving clockwise to return to a yellow dot; the words ‘Pols WaterTransport’ (the first and second one yellow, the middle one white) appear in the lower part of the flag above two stylized waves, white on blue until the reach the lower fly where a number of white disks changes them into blue waves, mostly on white.  These disks are arranged in a rectangle, four by five. There is a slanting white rectangle, ascending if you like, partly underpinning the curved arrow and the first two words of the company name.
Jan Mertens, 12 Apr 2007

It is always referred to as "Jos. de Poorter", perhaps "Joseph" of "Josephus" is meant.  The flag is allright of course.
The full company name was "Firma Jos de Poorter, Reederij & Cargadoors" (i.e. Company Jos. de Poorter, Shipping and Shipbrokers) and had its seat at the Veerkade, Rotterdam, Mr de Poorter being sole owner.
At one time Jos. de Poorter operated an ore terminal at Vlaardingen, putting to work local fishermen staying ashore during WWI because of mines. The company was also active as a railway agency for traffic between Rotterdam and Kings Lynn (GB).
Sources: this website and this one.
Jan Mertens, 16 Jul 2008

Binnenschiffe.com, a German site dedicated to inland shipping, offers a little series of flag photos.  One of these concerns the Dutch shipyard (repair, extension, and newbuilt) H. Poppen (clickable): The same flag is shown flying on the bow of vessel ‘Johanna-M’: Yellow field bearing combined initials “HP”(the 'H' higher), black and horizontally striped (relief is suggested as well), plus black name “Scheepswerf H. Poppen / Zwartsluis B.V.” below it and in the lower fly, respectively. Hardly seen is the top of the logo, a triangle and a little rectangle, also striped with three dimensions suggested. Photo originally uploaded by "Schlickrutscher".
See the complete logo – in blue – on this company page.
For the company history, see the ‘Historie’ page (upper menu). Founded in 1963 by Hilbrand Poppen, who carried on the family shipbuilding tradition, by taking over the Apperlo shipyard at Zwartsluis near Zwartemeer, a S.E. extension of the IJssel Meer.  Further expansions in 1983 (takeover of next-door shipyard), 1992 (new sheds), and 2003 (new yard, completely level).  The yard, situated on the River Meppelerdiep, seen from above (click photo).
Jan Mertens, 20 Aug 2009

This laconic website (Dutch only) is maintained by Pot Scheepvaart (i.e. Shipping) established at Delfzijl, NE Netherlands.
Owning nine (soon ten) coastal vessels - currently all named after banks - Pot leaves freighting and crewing to Wagenborg. Founded in 1918 by Daniel Pot, grandfather of the current owner, the company has been collaborating with Wagenborg since 1924.
The firm transports a variety of goods but makes a point of mentioning special cargo.
The funnel design seen on the website also appears on the house flag which may be found a number of times on the internet, as Pot’s beautiful ships are popular with spotters. The last photo provided flag detail. White field with bright green horizontal bottom stripe, company logo in the centre: stylized black initial ‘P’ and green initial ‘S’ touching each other.  Together, they are inscribed in a rectangle.
The ‘Kustvaartforum’ (i.e. coastal shipping forum) discussion site, in Dutch, has a page-in-progress concerning Pot Scheepvaart:
Jan Mertens, 16 Mar 2009