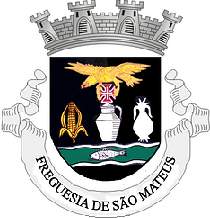 Shield Sable, a bar wavy Vert fimbriated Argent charged with a fish Argent, above a corn cob Or, an amphora Argent and a canteen Argent ordered per fess. In chief a goshawk Or armed Gules holding a cross of the Christ Knights in his claws. Mural crown Argent with four visible towers (town rank) and white scroll with inscription in black initials: "FREGUESIA DE SĂO MATEUS".
Meaning:
The goshawk is a local symbol of the Azores. The green bar wavy is representing the Atlantic.
Klaus-Michael Schneider, 21 July 2015

São Mateus Commune, usually called Praia, is one of the four communes of the Santa Cruz da Graciosa municipality (q.v.); it had 837 inhabitants in 2011 and covers 12.8 km².
Klaus-Michael Schneider, 21 July 2015