Banner of the Roman Catholic Church

The banner of the Roman Catholics is well known. It is lengthwise divided by white and yellow. The centrally ruled Roman Catholic hoists this flag all over the world, the last time to be seen during the Pope's visit in Poland.
Dieter Linder, 7 June 1997

I used to be a practising Catholic and I have never seen a similar flag; it could be a German creation for the visit of a pope or something similar, but the Catholic Church, as far as I know, has no flag (of course the Vatican City and the Holy See have a flag and coat of arms, but not the Church itself).

I have found on the Vatican website news about Vessillo di Santa Romana Chiesa, in Italian; this one might be considered a sort of "flag of Roman Catholic Church", but is no longer used, as far as I know; other info could be found here: http://en.wikipedia.org/wiki/Gonfalone_of_the_Church - I think it is just an adapted translation of the Vatican page).

In Italy during Corpus Christi and similar feasts a white flag with a red cross is sometimes used in processions; it is very similar to the famous Saint George's Cross.
Paolo Montanelli, 23 January 2014

A photo of the flag, taken in Cologne, Germany on 2012-06-30, can be found at https://www.flickr.com/photos/taylormcconnell/7474622970. Note that gold is at the hoist, as in the flag of Vatican City, and that the form, with regard to the hoisting, is what is called Knatterflagge in German.
Tomislav Todorovic, 15 November 2015

A few other examples of the Catholic Church flag found on the WWW:

This flag is usually flown outside Catholic churches. It has the same dimensions as the Vatican flag except it is blue and white. In the white portion there is a capital M with a Cross over it and these are surrounded by 12 stars. The M, Cross and stars are the same shade of blue as the other half of the flag. The image here shows the symbol on a medal.
Patrick Devers, 3 September 2005

The Virgin Mary blue and white flag (without anything else) is used with the Vatican colours in Lourdes. I also saw it in Orléans during the festival of Joan of Arc.
Pascal Vagnat, 8 September 2005
[See flag in Roman Catholic Church in Poland, below]

In Southern Bavaria (Germany), a banner known as Kirchweihfahne may be flown outside a church to mark its anniversary (Kirchweih). Also known as "Zachäus-Fahne" (Zacchaeus Banner) after the Biblical character in the Gospel of Luke, Kirchweihfahne is a vertical red banner with a white cross overall, sometimes offset upwards. Proportions can vary considerably.
Miles Li, 11 December 2017

This appears to be a purely Catholic tradition, and therefore restricted to the Southern, mainly the rural, parts of Bavaria. The original name, as I know it, is not "Zachäus-Fahne", but simply "Zachäus" (in dialect also "Zacherl"). My understanding was that the flag itself, hanging high above us, directly represents Zacchaeus, that had climbed up a tree to see Jesus.

From a quick search I learned that the usual explanation for the colours is that Zacchaeus ripped his trousers during climbing so that other parts (shirt or perhaps underpants) in white became visible. This is a legend, though, and I am somewhat skeptical as all the sources below report the same story.

Only one of the sources [7] points to a different explanation: Kirchweih was also time for important markets; and for these in many places there were particular flags to be hoisted. The similarity of the "Zachäus" to the ancient military flag is very striking. So it is quite possible that the original flag, denoting the authorities during the market, spread to the religious content of Kirchweih.

The Marian flag - a bicolour of white over blue, the colours associated with Mary in the Polish usage. I remember when I was in Poland as a child in 1974, I acquired a Polish flag, a yellow/white flag and a white/blue flag.
Robert M J Czernkowski, 21 May 1999

At the turn of the last century, Polish immigrants in the US set up the "Polish National Catholic Church" - this church is a member of the group of churches known as "Old Catholic". The church has a website. From the US, the PNCC spread up to Canada and back to Poland - both before WWII and afterward, resulting in two separate groups there. I've been told that in Poland it is referred to as the "National Church", but in doing a bit of web searching this morning I found that one of the groups in Poland is using the name "Polish Catholic Church".
Michael Roth, 1 February 2001

The PNCC does not seem to have its own flag.
Jarig Bakker, 1 February 2001

Pilgrimage to the Cathedral of Notre Dame, Luxembourg 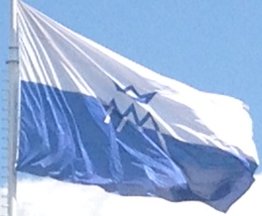 The blue-white flag with the letters AM (Ave Maria) hoisted on Roosevelt Bvd. is to mark the annual pilgrimage to the Cathedral of Notre Dame (Octave).
Nadine Knepper, Luxembourg City Tourist office, via Fabien Antoine, 19 May 2014

Franciscan Custody of the Holy Land

The flag for the Roman Catholic Church's Franciscan Custody of the Holy Land, flying outside the Custody's US headquarters, the Franciscan Monastery in Washington, DC. It is white with a red Jerusalem cross (a cross potent with a crusil in each angle). This design is attributed as the arms of the Crusader Kingdom of Jerusalem (but in yellow on white), and is used for the Papal Order of the Holy Sepulchre. The Franciscan friars working for the Custody wear the Jerusalem cross embroidered in red on the left breast of their brown robes. The symbolism is variously attributed to the five crosses representing the five wounds of Christ or to the message of the Gospel (the large cross) being carried to the four corners of the earth.
Joe McMillan, 27 April 2000