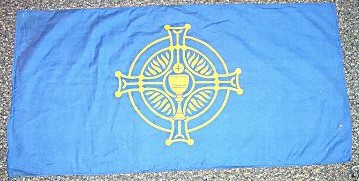 “Catholic and Irish in conception and execution (,i)t is based on the famous Cross of Cong, a perfect example of Irish ecclesiastical art. The head of the cross, which is a processional one, is reproduced in the design with the staff omitted. The beautiful Celtic interlacing in the panels is copied from the original. The chalice embodied in the design is not a representation of any actual chalice, but rather an approximation to one such as would be made by a contemporary Irish Craftsman working in the Celtic tradition. The Host is designed in the universal mode of Eucharistic symbolism. The Latin inscription—"International Eucharistic Congress at Dublin" is in Celtic script, after the manner of the Irish artist-scribes.”

See flag as shown on eBay is a blue flag bearing the above-mentioned design – the basic one, at least - in yellow. Source: Irish eBay offer no. 160044776907 (ended 1 Nov 2006) with comments: "This flag is one that was carried to the various cer[e]monies that took place during the Eucharistic Congress in Dublin. It is a deeper blue than it appears to be in the photo. It is in good condition. It measures 36'' X 18''."
Jan Mertens, 17 April 2009