(Note: You need an Unicode-aware software and font to correctely view the cyrillic text on this page. See here transliteration details).

The Law on flag was adopted by Moscow Regional Duma (decision #5/155) on 3 dec 1997, but the governor was against it. He did not signed the Law, and Law did not took it into power. Flags were not made. On 9 march 1999 Governor (A. S. Tyazhlov), after consultation with historicians, signed the Law at last (1,5 years later!!). After this date new flags were made and hoisted near buildings of regional Duma and regional Administration.
Victor Lomantsov, 07 Apr 2000 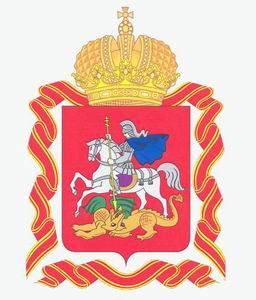 The smaller shields with the arms of other towns of the oblast are:

On some arms, there is a chief or a canton with the arms of Moscow city. (Source: Gerby Podmoskoviyh Gorodov. [gpg97])
Pascal Vagnat, 09 Apr 1999