(Note: You need a Unicode-aware software and font to correctly view the Cyrillic text on this page. See here transliteration details).

Really, though administrative center of Leningrad region is S. Petersburg old name of region conserve now. It’s very curious. In future possible unification of Region and S. Petersburg in one subject of Russian Federation (now they’re different subjects). By the way, when Leningrad was renamed in Sankt-Petersburg, it not was subject of RSFSR (administrative center of region only).
Andrey Yashlawsky, 19 Jan 1999

The background is red (krasnyĭ), and not dark red (purpurnyĭ).
Michael Simakov, 11 Jan 2000

The flag of St-Petersburg is a rectangular red field with two crossed silver anchors (the river anchor and the sea anchor). Gold scepter surmounted with double-headed eagle is placed over the anchors.
Ratio 1:1,5 Reverse side of the flag is a mirror of obverse side.

Coat of arms were adopted by Presidium of City Council of Leningrad (former name of St. Petersburg) on 6, September, 1991 (Decision 270) and confirmed on 2, December, 1991 by City Council of St. Petersburg. In fact the arms were designed in early XVIII c. by Italian heraldist F. Santi, the assistant of Heroldmaster, officially adopted in 1780 and readopted in 1991. St. Petersburg — former capital of Russia. This status is symbolized with scepter.
Victor Lomantsov, 05 Mar 2002

These are two different types of anchors — triple for river, and other for sea. There were placed on coat of arms because St. Petersburg has sea and river ports.
Michael Simakov, 20 Dec 1999 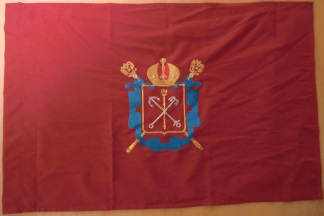 While staying in St. Petersburg, I got my hands on a red banner, embroidered with the greater arms of the city. The seller wasn't able to tell me what the flag is, nor have I been able to find it anywhere else. Does anybody have any idea what it is?
Kryštof Huk, 9 August 2016

This is an unofficial flag made by flag-makers. You can buy several types of city flag in St-P. - red, white-blue-red with coat of arms, black-yellow-white with coat of arms. But the red flag with anchors and scepter is the official one.
For example: http://rusatribut.ru/products/flag-imperskij-s-bolshim-gerbom-sankt-peterburga-semya-gorod-strana
Victor Lomantsov, 10 August 2016

Widespread but incorrect image of the flag

This image was originally made by me. In 1995 I did an article on St. Petersburg flag for Spanish Gaceta de Banderas [ban]. I had no photos of the flag or its detailed images. I only saw this flag on TV. I sent to editor of Gaceta the description of the flag without the good image. But there was a very rough sketch of the flag in my letter (I was sure, the sketch is too bad for publishing). Editor of Gaceta published this sketch in No 18. Then I decided to reconstruct the image. The reconstruction was not very good too: the scepter was in wrong form, the anchors were too large etc. But it was better then first sketch. Later I have found good image, but the article in Gaceta No 20 (april 1995) was published with my reconstruction of the flag. Several years ago I was surprised : my incorrect image made in 1995 is reproduced on many web sites (without my name, of course). And at last I was shocked: I saw this image on the official web page of St. Petersburg! My wrong image copied by Petersburg webmaster! (Gvido probably has taken the image from there and vectorized it).
Victor Lomantsov, 05 Mar 2002

Rainbow flag with red at the top and violet at the bottom, violet stripe extending upwards in form of several landmarks of Saint Petersburg, is presented at Wikimedia Commons since 2007.
Photos of the flag in real use can be found here (image) and here (image).
These photos are dated after the creation of the image from Wikimedia Commons, so it remains unclear whether the existing flags are made after that image, or the image was made after some real-life sources. Regardless of that, this is a flag whose existence is now verified.
Image of flag is derived from the above-mentioned image from Wikimedia Commons.
Tomislav Todorović, 26 December 2015