I am sure that this is purely coincidental, but the color scheme used by the Irkutsk State Technical University has a strong similarity to that of the Most Serene Republic of San Marino! The flag layout is different, but the shade of blue used on both flags seems very similar.
Ron Lahav, 14 Jul 2008

The Kazan Imperial University was chartered in November 1804 by Emperor Alexander I. It was renamed in 1925 after Vladimir Ulyanov Lenin, who studied Law at the university. The status of Federal University was granted in 2010 by the Russian government.

Kazan University has been the place of major scientific breakthroughs. The Polish linguist Jan Niecislaw Baudouin de Courtenay (1845-1929) founded the Kazan Linguistic School, pioneering the study of oriental languages and cultures in Europe. The Baltic German chemist Karl Ernst Claus (1796-1864) discovered in 1844 a new chemical element that he named ruthenium (symbol, Ru; atomic number, 44), the Latin name of Russia. The mathematician Nikolai Lobachevsky (1792-1856), former Rector of the university, developed the non-Euclidean, hyperbolic geometry that would be named for him.

The flag of Kazan Federal University is blue with the university's emblem, counter-colored. 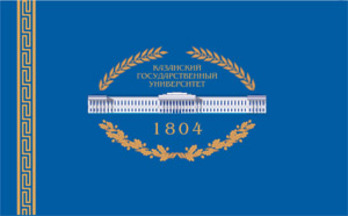 Here is the URL for the Kazan State University in Russia.
Valentin Poposki, 4 Nov 2005

Blue field, a representation of the main University building in white surrounded by gold laurel branches (top) and oak? branches (bottom); above the building, the name of the institution in Cyrillic letters and below, the year of foundation ‘1804’, all in gold; near the hoist, a vertical ornamental strip consisting of a meander between two narrow stripes, all in gold.
Jan Mertens, 23 Jun 2008

It has recently been renamed "Kazan (Volga region) Federal University" / Казанский (Приволжский) федеральный университет. The logo has changed accordingly and presumably the flag as well, if it is still in use.
Andrew Weeks, 18 Oct 2011

Нижегородский государственный университет им. Н.И. Лобачевского (ННГУ) (English: Nizhny Novgorod (State) University (UNN) N.I. Lobachevsky , also known as Lobachevsky University, was established on January 17, 1916 as one of the three initial Народных университетов России (English: People's Universities of Russia). The first idea of establishing the University first arose in 1896, when the city was preparing for the opening of the XVI Всероссийской художественной и промышленной выставки (English: XVI All-Russian art and industrial exhibition) (https://en.wikipedia.org/wiki/All-Russia_Exhibition_1896). On the wave of revolutionary reforms in 1905, at a meeting of the City Duma on October 19, the City Head of AM. Memorial suggested organizing a People's University in Nizhny Novgorod.

On March 28, 1918 it became the first State Higher Educational Institution of Soviet Russia as proclaimed by the Губернский исполком (English: Provincial Executive Committee (of Nizhny Novgorod) later, on May 22. Then, on June 28 the closure of the политехнического института (English: Polytechnic Institute (in Nizhny Novgorod)) was transformed into a State University properly. From 1932 to March 20, 1956, its name was State University of Gorky (http://www.unn.ru/site/about/news/60-let-so-dnya-prisvoeniya-nizhegorodskomu-gosudarstvennomu-universitetu-imeni-n-i-lobachevskogo) – from 1932 to 1990 the city of Nizhny Novgorod was known as Gorky – and from March 20, 1956, through Указом Президиума Верховного совета РСФСР (English: Decree of the Presidium of the Supreme Soviet of the RSFSR) (http://www.unn.ru/site/images/history/decree-1956.jpg in an
effort headed by А.А. Андронов (English: AA. Andronov) and from 1956 to 1990 the Lobachevsky State University of Gorky after great Russian mathematician Nikolai Lobachevsky."
Sources: http://www.unn.ru/site/about/znakomstvo-s-universitetom/istoriya
http://eng.unn.ru/about/history and
https://en.wikipedia.org/wiki/N._I._Lobachevsky_State_University_of_Nizhny_Novgorod

Nikolai Ivanovich Lobachevsky (1792-1856), Professor at the University of Kazan (1822), is best known for the formal definition and exploration of the non-Euclidian hyperbolic geometry. His views were so outrageously innovative that the venerable St. Petersburg Academy of Sciences refused the publication of his seminal paper "A concise outline of the foundations of geometry".
Ivan Sache, 28 June 2017 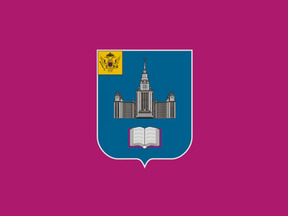 Reported by Chrystian Kretowicz (28 Dec 2008) at another site which had stolen it from Victor. 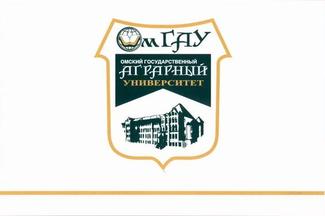 Reported by Chrystian Kretowicz (28 Dec 2008) at another site which had stolen it from Victor.

Image made after photo found by M. Revnivtsev at http://www.rgo.ru/ (official WEB-page of the society)
Victor Lomantsov, 9 Jun 2011

"The Russian Geographical Society (Russian: Ру́сское географи́ческое о́бщество «РГО») (RGO) is a learned society based in Saint Petersburg, Russia. It promotes exploration and geography with research programmes in fields includingoceanography and ethnography. The society was founded on 6 August 1845 in Saint Petersburg, Russia. Prior to the Russian Revolution of 1917, it was known as the Imperial Russian Geographical Society."
Source: http://en.wikipedia.org/wiki/Russian_Geographical_Society
For additional information, go to: RGO (official website)

This picture shows a close up of the RGO flag but in a lighter blue version than the one reported.
Source: http://rt.com/news/russia-loch-ness-lake-269/
Esteban Rivera, 20 April 2014

I think they changed the flag several times. For example, at http://www.projectnext.ru/education/?id=226 we see another version (very small).
Victor Lomantsov, 25 July 2016

An earlier version is also seen. The detail of the emblem can be seen here.
Victor Lomantsov, 25 July 2016 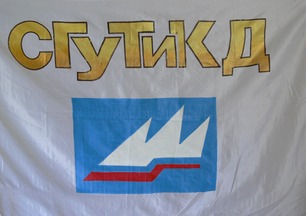 The flag of the Southern Ural State University located in the City of Chelyabinsk in Russia. Flag is here.
Valentin Poposki, 11 Nov 2005

When searching for informantion on the Russian Geographical Society I came across the following pictures and would like to know if this entity has different flag versions (variants) or if they are complimentary flags for its Departments (Divisions).
Source: http://rt.com/news/russia-loch-ness-lake-269/
The flag reads "Underwater Research Group" and features a golden coat of arms.
Esteban Rivera, 20 April 2014