Around 1945 the capital of country was moved from Tulagi to Honiara.

Postwar division of Solomon Islands (...): these districts were further subdivided into councils (in some cases one council was one district): Central, Eastern, Malaita, Western.

The new provinces were the same as the council areas under the previous system.

Around July 1983, the Capital Territory split from Guadalcanal district.

On 25 February 1995, Choiseul province split from Western. Possibly on a different date, Rennell and Bellona split from Central; Capital Territory merged with Guadalcanal.

Other names of subdivisions 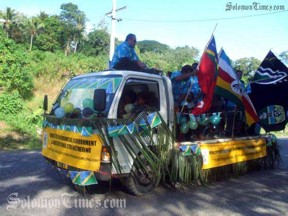