Saint Helena, Ascension and Tristan da Cunha is an Overseas Territory of the United Kingdom in the southern Atlantic Ocean comprising the island of Saint Helena, Ascension Island 700 miles to the north, and a group of islands 1,300 miles to the south, of which Tristan da Cunha is the only one with a settled population. Gough Island has a meteorological station maintained by the government of South Africa.  Inaccessible Island and the three Nightingale Islands are uninhabited.    It was previously known as Saint Helena and Dependencies until 01 September 2009, when a new constitution came into effect giving the three islands equal status within the territory.
Bruce Berry, 09 May 2013

Ascension Island is a small speck of land in the middle of the South Atlantic Ocean and has been a British possession since the Napoleonic Wars and immediately afterwards, when it was a support base for preventing any rescue attempts to liberate Napoleon from St. Helena. It has functioned as a dependency of  St. Helena since 1922, but has never had a permanent resident population as has that island.  Most of its inhabitants have over the years been initially British and latterly American military and technical personnel.  Ascension played a major role as a tracking station in the US space program as well as serving as a staging area for the British relief expedition to the Falkland Islands.
Ron Lahav, 09 Mar 2005

According to H Gresham Carr (1961) [car61] "Ascension became a dependency of St. Helena in 1922. Initially, this island was administered by the Board of Admiralty and flew the (British) White Ensign. Later an undefaced British Union Flag was used until a distinctive flag for the island was adopted in May 2013.
Bruce Berry, 09 May 2013

A new flag of Ascension Island will be raised for the first time at 10.15 a.m. local time on the 11 May 2013.  This is the last overseas British territory to adopt distinctive symbols.
John Moody, 08 May 2013

The flag, as for other Overseas Territories, is the Blue Ensign adorned with the Coat of Arms for Ascension Island.  Ascension’s Coat of Arms, which was approved by Her Majesty in May 2012, shows important symbols from the Territory, including a shield emblazoned with the Green Mountain that dominates the skyline, together with three Wideawake Birds, secured by two Green Turtles.

Both the design of the Coat of Arms and the flag emerged from an extensive public consultation exercise on Ascension (see below).

Ascension Island has previously flown the (British) Union Flag on Island and on State occasions.
Jens Pattke, 18 May 2013

Ascension Island remains a military working island with no right of abode. As such, Ascension does not have a separate administrative flag or national song.  However, the national anthem of the United Kingdom, "God Save the Queen" is recognised.
Xander Halliwell (Administrator's Office) sent by John Moody, 19 Jan 2021.

I have been informed about the meeting of the Ascension Island Council on 30 July 30, 2010 where:

"Two draft designs for an Ascension Island flag have been circulated and discussed in Council and these will shortly appear on notice boards to invite comments from members of the public. When a design is approved it can then be submitted to the College of Heraldry in the United Kingdom and hopefully we will have our own flag, like the other Overseas Territories, instead of flying the Union flag."
Chrystian Kretowicz, 19 Aug 2010

“Ascension Island is unusual among Britain’s Overseas Territories in not having its own flag. Just looking at the territories within the South Atlantic, our sister islands St Helena and Tristan each have their own unique flags, as does the Falkland Islands, Turks and Caicos etc. Even the unpopulated South Georgia and South Sandwich Islands has its own. Meanwhile Ascension still flies the Union flag by default, which may confuse many of our visitors into thinking they are actually in England!

So what do we need to do to be able to fly our own flag? The first step is to agree an outline design locally and then seek the Governor’s approval. An application can then be made to the College of Arms in the UK, which will determine whether the design meets approved heraldic guidelines before applying to HM the Queen for a Royal Warrant.

Efforts have been made in the past to agree locally what design to put forward, but differences as to what the flag should look like held up progress. More recently some design concepts have been discussed from time to time with the Island Council, resulting in the two designs shown below. The Council has agreed that it is now time to invite comments from the public, as to determine which is considered the most suitable for the island.

Flag Design A is inspired by the natural features and wildlife of Ascension. The green represents Green Mountain and the brown for the many cinder cones around the island, a yellow band to depict the island’s beaches, and a sea bird, land crab and turtle, all symbolic of Ascension Island. This design, without “supporters” etc, follows the St Helena example.

Flag Design B depicts a geometric Green Mountain, together with a Fairey Swordfish, the first aircraft to land on the newly constructed airstrip in 1942. Together with the triangular shape of the mountain this also forms the letter ‘A’ for Ascension.  This design also features a turtle and bird as “supporters” – following the flag format of some territories such as Tristan.

These are still quite rough designs and whichever design is chosen will need to be improved upon by the College of Arms before it is formally approved as the flag. Comments and suggestions on these designs can be sent to flag4ascension@ascension.gov.ac”.
Submitted by Colin Dobson, Chrystian Kretowicz and Bruce Berry 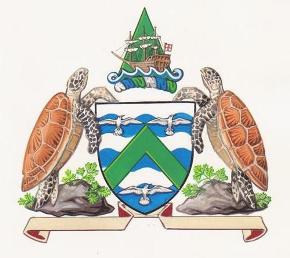 The Islander newspaper published on 02 February 2012 an "example of the Ascension Island Coat of Arms, which the Island Council has recommended to the Governor for approval".
Olivier Touzeau, 31 March 2012

Her Majesty, Queen Elizabeth II, has approved a new coat of arms for Ascension Island, after a design was drawn up by the College of Arms in London and submitted to Buckingham Palace.  Islanders were asked what they would like to see on the coat of arms, and then the college produced a design based on the features suggested – including the turtles that famously lay their eggs on Ascension’s beaches.  The Island Council will now consider designs for a flag.  In January it was proposed that it should be a blue ensign with the coat of arms on the right-hand side.

Ascension also decided in 2009 to begin issuing its own commemorative coins for special occasions, as a source of income and a means of raising the island’s profile around the world.
Jens Pattke, 17 Oct 2012

At the official Diamond Jubilee celebration for HM Queen Elizabeth II, the new flag of Ascension Island will be displayed for the first time according the Thames Pageant Guide provided by the Flag Institute.
Jens Pattke, 02 June 2012

I guess the design is a compromise, but the end result is hideous! I don't suppose Graham Bartram had much to say about it and the Ascension Islanders (or some other authority) insisted on having the entire coat of arms in the fly.  A much better design would have been have had the shield only... or even the three birds and nothing else.

A green chevron over barry wavy is not a particularly successful design.
Željko Heimer, 02 June 2012

I share the same opinion with Željko. Compared to the former draft of spring 2012, the compartment has been changed. There is no band under the compartment.  The roots of the Scottish settlers were not taken into design and the ship flies the English ensign of St George only.
Jens Pattke, 03 June 2012

I spoke to Graham Bartram about the status of the Ascension Island flag. The design has been approved by the Governor and has now been sent to the College of Arms for a final drawing to be prepared for the Royal Warrant, after which it will become official. I believe the final design will be slightly different from that displayed at the Thames Pageant (motto and mantling etc has been added).
Bruce Berry, 07 June 2012

British Army Base on Ascension

This flag can be seen in a YouTube video filmed on Ascension Island in 2017.  It appears to be a navy, red, and sky blue horizontal tricolour with a yellow map of Ascension Island in the centre. I believe it's supposed to represent the military base on the island.  A sign with a similar design can be seen in a BBC News article from 2007.
Brendan Hennessy, 01 July 2020

Mr. László Balogh (who collects flags and manages the Flag Museum in Budapest) received a letter from Administrator of Ascension Island, dependency of St. Helena. The Administrator sent him a brochure or leaflet displaying a shield or badge of "Ascension Island", which also appears on Blue Ensign. Mr. Balogh gave me a copy of part of this publication, so I scanned this badge. [Vert behind an open book crossed palewise a sledge hammer an anchor in bend and a pick-axe in bend sinister all Argent and in the chief of the last a dragon passant Gules].   However, the home page of Administrator of Ascension Island on http://www.ascension-island.gov.ac shows a picture of Administrator's Office, and only the British Union Jack flying on a flagpole planted in front of the building.
Zoltan Horvath, 03 Sept 2001

The arms shown are those of the University of Wales in Swansea (hence the Red Dragon and green and white field). I think the University has a wildlife project on the Island. If you look at http://www.ascension-island.gov.ac/postoffice/ascturtles_mar99.jpg you will see a set of stamps from the island along with the arms and name of the University.  So the blue ensign with this badge is bogus! I know Ascension Island wants a flag, but they won't be allowed to use someone else's Arms. They will need to get a grant of arms from the College of Arms before they can ask for those arms to be used on a defaced ensign. Nowadays territories' flags no longer use non-armorial "badges".
Graham Bartram, 05 Sept 2001