The Blue Ensign of Her Majestyąs fleet defaced in the fly by the full Armorial Ensigns of the Territory, as granted by Royal Warrant of Her Majesty the Queen, that is to say, for Arms, Per Fess Azure and Argent between four yellow-nosed Albatrosses volant outwards in lozenge the two in base reversed a Lozenge embowed inwards all counterchanged and for the Crest upon a Helm Within a Naval Crown Or a Cap Azure thereon a Tristan da Cunha Longboat Argent the gunnel bow stern and rudder Azure the booms and mast Or and for the Supporters On either side a Tristan da Cunha Spiny Lobster Or together with this Motto Our Faith is our Strength, as the same are in the painting hereunto annexed more plainly depicted. This flag to be used on land and at sea as a courtesy ensign.

The (British) Blue Ensign shows the arms in full detail, as they would look if printed. A slightly simplified colour scheme exists for appliquéing the badge, which omits much of the shading.

As you can see from the wording of the proclamation the Blue Ensign is specifically made the courtesy ensign for Tristan da Cunha.  Now that the badge has been defined, a separate warrant from the Ministry of Defence is required to allow vessels belonging to, or chartered by, the Government of Tristan da Cunha to fly the defaced Blue Ensign. At present Tristan does not have a shipping register of its own so does not need a defaced Red Ensign.
Graham Bartram, 20 Oct 2002


The flag of the Administrator of Tristan da Cunha is the British Union Flag defaced with a white disc edged with a gold ring under a garland of laurel and tied with a blue bow at the base. On the disc the full Armorial Ensigns of the Territory, as given above, this being the flag of an officer administering a government. The same are in the painting hereunto annexed more plainly depicted. This flag to be used in the presence of the Administrator, or acting Administrator, on land and at sea.

The Administrator's flag can be used on land and at sea, as a distinguishing flag. Unusually it's not limited to Tristan, which reflects the position of Tristan as a dependency of Saint Helena, where the Administrator can also use his flag, and even more uniquely at Tristan House in Cape Town, the mainland office/residence of Tristan in South Africa.

The design of the Blue Ensign follows the modern pattern for British Overseas Territories, but during the design phase several different design elements were proposed, including potato plants and wavy white lines, but in the end the Island Council chose the standard design.
Graham Bartram, 20 Oct 2002

Tristan da Cunha is a dependency of St. Helena. Prior to adoption of current flag in 2002, the correct flags were the British Union Flag and the St. Helena flag.  By tradition they put both flags on the same pole, with the Union Flag uppermost (much like some Americans do with the Stars & Stripes and State flag).
Graham Bartram, 07 Feb 1998

A "republic" was proclaimed on Tristan da Cunha by the American Jonathan Lambert around 1811.  A description of the flag used can be found in a Dutch vexillological publication  [number and title not provided - Ed]. Unfortunately I'm unable to understand the description. I think that the flag is currently in the Public Record Office Museum of London.

According to my own sources, some American filibusters settled on the island in 1810.  In 1812, during the Anglo-American War the British decided to annex the island but this did not take effect until 1816 when Hudson Lowe, Governor of the Cape Colony, send a ship.  The reason for the delay was the fear that the island might be used as base by Napoleon's partisans, aiming for the release of the ex-Emperor.  Five officers and 36 senior officers and soldiers took possession of the island on 28 November 1816.  The group remained on the island until November 1817 when everyone was evacuated except for Corporal William Glass and his wife and two sons, and two other men.  Between 1817 and his death in 1853 Glass governed the territory.
Jaume Olle, 02 June 1997

Regarding the reference to "Hudson Lowe, Cape Governor" in 1812, it seems that the name Hudson Lowe does not appear on the complete list of governors and acting governors of the Cape from 1652 to 1910 that I have. The list for the period in question goes:
1807: Du Pré Alexander, Earl of Caledon, Governor
1811: Acting Governor Lieutenant-General Henry George Grey (July-September)
1811: Governor Lieutenant-General Sir John Francis Cradock (in office until 1813)
Gen Grey was again Acting Governor in 1813 until the arrival of Lord Charles Somerset, who was Governor until about 1822 or later.
This is not to say that there was not an official at the Cape named Hudson Lowe.

The heraldic blazon might be the best way to describe the flag pattern: White, a saltire per pale blue and red, pierced of the field.
Mike Oettle, 04 Jan 2002

I've had a query from someone regarding a flag of William Lambert's that he designed for Tristan de Cunha. My query has this description of Lambert's flag, which was published in an unidentified newspaper:

'The flag is formed of four diamonds, transversely from corner to corner, and five half-diamonds placed in the centre, on the top, bottom and both sides. The 2 upper and 2 lower diamonds are blue next the staff or halyard, and red on the outermost side, the centre white, the four half-diamonds bear the letter W.'

On 27 Dec 1810 the "Baltic" from Boston (Mass), Captain Lovel, put three men on the shore of Tristan da Cunha, the Italian Tomaso Corri (or Thomas Currey) from Livorno; an American named Williams, who signed as Andrew Millet and another American, Jonathan Lambert from Salem, Mass, who took charge. Lambert pronounced himself sovereign of Tristan da Cunha and a proclamation was printed in the Boston Gazette of 18 July 1811.  In that proclamation he adopted a flag for the islands and a white flag as the ensign for the merchant fleet of the islands.

Description of the flag, separate in the Boston Gazette of 18 July 1811: five lozenges standing on their points, and four half lozenges to the sides top and bottom. The two lozenges to the hoist were blue, the middle one white, the other two red. The four half lozenges contained the letter W.    In the Public Record Office Museum in London a flag is mentioned as the flag of Lambert, which differs from the flag described above.  Lambert and Williams and another American perished at sea on 17 May 1812, after which Corri lived as a Robinson Crusoe on the island; on 5 and 6 March the captain of the "Semiramis" met Corri and presented him with the Union Jack.
From: Tristan da Cunha 1506-1950, Geschiedenis van een Volkplanting, by Jan Brander, 1952.
Jarig Bakker, 02 Dec 2000

In a book called "L'Etat c'est moi" by Bruno Fuligni [fuL97] there's a paragraph about the history of Jonathan Lambert.  It is said that "he called Tristan da Cunha "Island of Rest", pronounced himself emperor, and adopted a *green* flag, with 5 diamonds and 4 half-diamonds, which were blue and red.  Then, he sent a communiqué to the Boston Gazette."
Olivier Touzeau, 03 Dec 2000

Above is a discussion of the role of Hudson Lowe, as the Cape Governor who sent a ship to Tristan de Cunha circa 1816. As Mike Oettle points out, Lowe was not Governor of the Cape Colony. Lowe was Governor of St. Helena and the confusion probably arises because Lowe had sent a correspondence to the Chief of the Naval Division at Cape of Good Hope, Rear Admiral Sir Putney Malcolm. This information was forwarded to the Cape Colony Governor, Lord Somerset.  The 1885 naval accident referred to in the text occurred when a longboat was capsized when 19 men set off to try and acquire much needed provisions from the baroque West Riding which had stopped at the island to take aboard water. The longboat capsized in a squall and all but 4 perished (one of the 4 who survived apparently went insane). There were apparently additional adult men in the island census, but they were aged or unable to work.
Source: The Annals of Tristan da Cunha Professor Arnaldo Faustini, unpublished manuscript transcribed and available from http://www.btinternet.com/~sa_sa/tristan_da_cunha/annals_main.html in PDF format.
Phil Nelson, 10 Aug2003

On 30 September 1985 Tristan da Cunha issued a four-stamp set illustrating the flags used on the island. 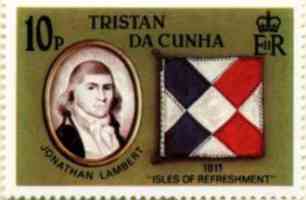 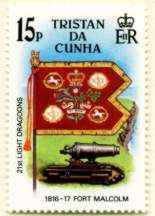 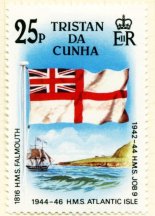 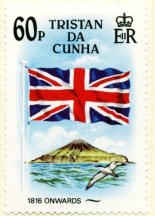 10p: Jonathan Lambert and the flag he devised for the "Isles of Refreshment" in 1811.

60p: The Union Jack, used continuously on the island since 1816.

Enlarged detail of the guidon of the 21st Light Dragoons.

It seems that an other stamp virtually the same at a quick glance was issued soon afterward with Scott number 804.
Richard Mallett, 30 April 2006