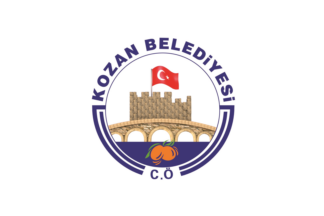 The flag of Kozan (photo) is white with the municipality's emblem in the middle. "Belediyesi" means "Municipality".
The emblem of the municipality features the two landmarks of the town, the "Roman" bridge over river Kilgen (photo) and the old Sis fortress (photos). Quoting the notice from the Rensselaer Digital Collections: