The flag of Ahlat (photo) is white with the municipality's emblem.

The flag of Ahlat (photo) is white with the emblem adopted by the district government, with appropriate writing. 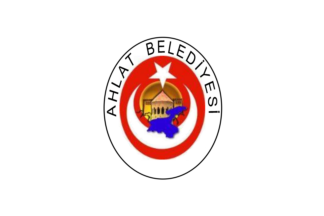 An older flag of Ahlat (photo) was white with the municipality's former emblem. 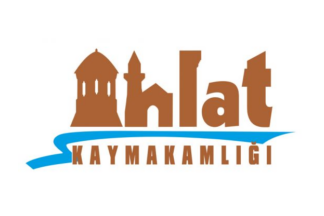 The emblem, adopted on 25 November 2014 by the district administration, represents Ahlat's historical and natural texture at first glance.
The first "A" is shaped like Emir Bayındır kümbet, the town's landmark and symbol of its long history.
Letter "h" is composed of Kadı Mahmut Mosque and Bayındır Bridge, one of the district's oldest monuments. It also represents Ahlat as a bridge between past and future.
Letter "l" is shaped like the steles of the Seljuk Cemetery, the world's largest Islamic cemetery.
Letter "a" is combined with the local walking stick, highly prized by tourists.
Letter "t" was kept untouched to emphasize that Ahlat is a very old town.
The color of the logo is that of local stone.
The blue curved stripe beneath the logo represents the shore of Lake Van as viewed from a satellite; Ahlat has Lake Van's largest beaches.
The writing in stone color recalls that the town sunk several times into the lake through the history.
[Haber, 25 November 2014]

Emir Bayındır kümbet was built in 1477-1478 for Bayındır, who was the grandson of Akkoyunlu Turkmen ruler Uzun Hasan and the son of Rûstem Bey. Bayındır was killed in 1481 during the war against Sultan Yâkub. A writing credits the design of the monument to Amel-i Baba Can, from Baku - where he built a similar kümbet.
[Ahlat unofficial website]

Kadı Mahmut Mosque was built in 1584. The square-shaped mosque was built in a simple style. To the north of the main space is closed with a small three domes and three arches into the courtyard is the last congregation. The interior is illuminated with three windows on the east and west walls and two on the north and south walls. The mihrab niche is outcropped and has five facades.
[Ahlat unofficial website]

Ahlat houses the the world's largest Muslim cemetery and the first established in Anatolia by the Seljuk Turks. Ahlat was used as the military base for raids through inner parts of Asia Minor which used to be under authority of Byzantines. Ahlat became a Turkish town after the the battle of Mankizert (1071). Accordingly, the town is full of Turkish cemeteries for martrys lost in wars; gravestones were erected in the oldest Turkmen traditions with written inscriptions. The cemetery includes more than 8,000 gravestones and sarcophagi. About 1,000 of them are very tall, 3.5-4 m in height and have beautiful decorations with written inscriptions in rectangular cartouches on each side.
The Turkish government has applied to UNESCO for the registration of Ahlat gravestones into the World Heritage List in 1983.
[Turkey Gravestones]

The flag of Ovakışla (photo) is white with the municipality's emblem. "T.C." stands for "Türkiye Cumhuriyeti", "Republic of Turkey"; "Belediyesi" means "Municipality".