Bursa is the fourth most populous town in Turkey (1,704,441 inhabitants in the town proper in 2011, 1,948,744 in the Metropolitan Municipality).
Bursa was one of the first capital of the Ottoman State (1335), therefore its historical and cultural significance. The town is built in the foots of Uludağ, the mountain that has the most important winter sports resort in Turkey. Bursa has a significant role in Turkish industry with its proximity to supplies and distribution means.

The emblem of Bursa Metropolitan Municipality was chosen by the Municipality Assembly on 22 June 1976 among three submissions. The winning design was drawn by graphic artist Nazmi Günes.
From top to bottom, the following elements are shown on the emblem; Uludağ, the mountain that is close to Bursa; the Green Tomb, the tomb of Çelebi Mehmet constructed in 1421; Ulu Cami, one of the most important mosques of early Ottoman history and architecture; and kilickalkan dancers, a Turkish folk dance performed with a shield and a sword.
In 1991, after receiving the European City Award, the municipality added 12 stars around the emblem, which recall the European Union flag.

Built in the Seljuk style, Ulu Cami was ordered by the Ottoman Sultan Bayezid I and built between 1396 and 1399 by architect Ali Neccar. Ulu Cami is the largest mosque in Bursa and a landmark of early Ottoman architecture which used many elements from the Seljuk architecture. It is a large rectangular building, with 20 domes arranged in four rows of five that are supported by 12 columns. Supposedly the 20 domes were built instead of the 20 separate mosques which Sultan Bayezid I had promised for winning the Battle of Nicopolis in 1396. The mosque has two minarets.
There is also a fountain (şadırvan) inside the mosque where worshipers can perform ritual ablutions before prayer; the dome over the şadırvan is capped by a skylight which creates a soft light below, playing an important role in the illumination of the large building. The horizontally spacious and dimly lit interior is designed to feel peaceful and contemplative. The subdivisions of space formed by multiple domes and pillars create a sense of privacy and even intimacy.
[Beautiful Mosques Gallery]

The former flag of Bursa (photo) was blue with the municipality's emblem in full colors. 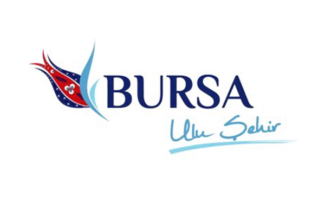 The logo flag of Bursa (photo) is inscribed with the motto "Ulu Şehir", "The Big Town".

The flag of the Bursa City Council (photo, photo) is green with the council's emblem. "Kent Konseyi" means "City Council".

The flag of BUSKİ (photo, photo, photo) is white with the administration's logo.

BTÜ (website), established by a Decree of the Council of Ministers published on 21 July 2010 in the Turkish official gazette, No. 27,648, is composed of 6 Faculties, 2 Institutes and 1 School.

Uludağ University (website), established in 1975 as Bursa University, was renamed in 1982 for the emblematic mountain dominating the town.
The university is composed of 13 Faculties, 2 Schools, 15 Vocational schools and 4 Institutes.

The emblem was designed in 1975, on the model of the Green Mosque. The eight-pointed star represents the eight faculties that formed the original university.
Turquoise was selected as the traditional color of Iznik tiles used to decorate the Green Mosque.
[University website]

Bursa Chamber of Commerce and Industry

The flag of the Bursa Commodity Exchange (photo, photo, photo) is white with the organization's emblem.

The flag of the Bursa Bar Association (photo) is white with the association's emblem.

Bursaspor (website) was established in 1963 in Bursa, as the merger of five amateur football clubs, Acar İdman Yurdu, Akınspor, Çelikspor, İstiklalspor, and Pınarspor. The club joined the First League in 1967 and won the Cup of Turkey in 1987.
The best achievement of Bursaspor, however, is the win of the First League in 2010; Bursaspor was only the 5th Turkish and 2nd Anatolian club (26 years after Trabzonspor) to win the title.

The flag of Bursaspor (photo) is white with three horizontal green stripes and the club's emblem in the center.
The emblem associates the club's colour - green for the green environment of the town and white for snow covering Mt. Uludağ - and the Turkish flag.
The five stars (black, red, yellow, green and blue) and year "1963" have been featured on the six emblems successively used by the club since its foundation. The five stars represent the clubs that merged to form Bursaspor.
[Club website]

The flag is also with a different, shield-like emblem on a blue field (photo, photo, photo).

DOSAB (website) was established in 1990 in Bursa. Today, the zone covers 483 ha and includes 548 companies employing 42,000 workers.
The flag of DOSAB (photo, photo, photo) is white with the organization's emblem.