The flag of Babaeski is white (photo, photo), or blue, with the municipality's emblem. "Belediyesi" means "Municipality".
The emblem features the two landmarks of the town, the Semiz Ali Pasha mosque, built in 1572 by Mimar Sinan (1489-1588, chief architect of Sultans Suleiman the Magnificent, Selim II and Murat III)), and the six-arched Murat IV bridge, build in 1633 by Çoban Kasım Ağa.

In its original state, the Semiz Ali Pasha Mosque, built as part of the Semiz Ali Pasha Complex, was once surrounded by a madrasa, a food kitchen for the poor (imaret), a caravanserai and bathhouse buildings. Even though the Complex is attributed to Sinan, only the mosque and the madrasa are mentioned to be Sinan’s designs in manuscripts about his life. Today, only the mosque is standing. It was built towards the end of the 1560s, after the death of the Pasha. Upon his bequest, Ferruh Kethüda had Sinan design and build this monument. Semiz Ali Pasha was famous for his sense of humor, which made it into books written during his lifetime, also for his weight, excessive enough to gain him the nickname “Semiz” (well-fed)! He was mentioned in records by foreign travelers as well as in Ottoman sources during his time. He was also well known for his honesty. In spite of the fact that he had risen up to the level of Grand Vizier (Prime Minister), his wealth was more modest than his predecessors; likewise, the buildings he had built were also modest in their architecture. The construction of the mosque corresponds to the building of the Selimiye and Sinan’s contributions may have been limited. The narthex and the courtyard were added later, in 1585-86, after the completion of the mosque. Its proportions, the ornamentation of the muqarnas stalactite vaults at points of transition at the base of the dome, and the unity brought in by the light that spreads all over the interior are quite impressive. The mihrab inside the mosque and the marble minbar are original reminders of the very elegant stone workmanship and arts in the classical period. The minaret is not original; it was ruined during the Bulgarian occupation of 1911-12 and rebuilt in 1934. The fountain in the courtyard was also built in recent years.
[Respect to Sinan project]

The flag of the Babaeski City Council (photo) is white with the council's emblem. "Kent Konseyi" means "City Council".

The flag of Alpullu (photo) is white with the municipality's emblem. "Belediyesi" means "Municipality".
The emblem of the municipality features the Sokollu Mehmet Paşa bridge, designed by Mimar Sinan, the chief architect of Sultan Suleiman the Magnificent.

Sinan designed and built this bridge for Sokullu Mehmet Pasha; it is also known as both Alpullu and Sinanlı, 123 m long, and considered to be one of the most picturesque of Sinan's bridges. It connects Alpullu to Sinanlı over the Ergene River. Contrary to the other bridges in the Thracian Region, this one was not built on the main Sultan's Road. Sinan was able to cross the river with a single span of 20 m. Other than this spectacularly large span, the viewing terrace on the bridge and the overflow basins he built with Bursa style arches will be well worth your trip to this structure. During the 1970s, the shops that were on the Sinanlı side were demolished. The municipal slaughterhouse adjacent to the Alpullu side was also taken out and rebuilt 50 m away from the bridge. Today, the dumpsite that is on the Alpullu side is the biggest problem for the bridge. Restored by the Department of Highways in 1983-87, this bridge is now closed to vehicular traffic and highly used as a pedestrian bridge by the inhabitants of Sinanlı who come to Alpullu for shopping.
[Respect to Sinan]

The sugar beet recalls that Alpullu is a the oldest center of sugar industry in Turkey.


The Alpullu sugar refinery is one of the 25 public sugar factories in Turkey. The Republic of Turkey prioritised agriculture and agricultural products industry in state economic development. In 1926 sugar factories in Uşak and Alpullu was founded by promotion laws. With later founded sugar factories of Eskişehir and Turhal, Turkey became able to produce the needed sugar. In 1926 Sugar Monopoly Administration was founded, thus state monopoly over sugar was established. In 1930s the fact that sugar prices decreased in world markets, but increased in Turkey, caused public reactions. Government invited Doctor Gustav Mikusch, the chief of Vienna International Sugar Statistics Union, and asked him to write a report on sugar production and its problems. With the regulation made in 1935, Turkish Sugar Industries Inc. Co. was founded and all sugar factories in the country became state-controlled.
[M. Karayaman. The sugar industry and its policies during Atatürk’s era] 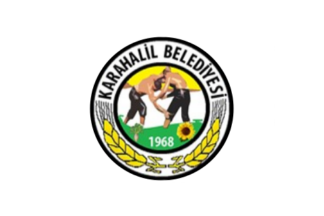 The flag of Karahalil (photo) is white with the municipality's emblem. "Belediyesi" means "Municipality".

The flag of Sinanlı is white with the municipality's emblem. "Belediyesi" means "Municipality".

Babaeski Chamber of Commerce and Industry

Flag of the Babaeski Chamber of Commerce and Industry - Image by Ivan Sache, 2 September 2019

The flag of the Babaeski Chamber of Commerce and Industry (photo, photo) is white with the organization's emblem.