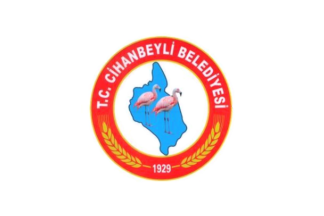 The emblem of the municipality features Lake Tuz (Salt Lake) and the colony of flamingos living there.
Lake Tuz is a UNESCO's Special Environmental Protection Area (SEPA), with the following description:

The Lake Tuz SEPA was declared by the Decision of Cabinet of Ministers numbered 2000/1381 dated 14.09.2000. The Lake Tuz protected area is within the borders of three provinces namely, Ankara, Konya, and Aksaray. The Lake Tuz is the second largest lake in Turkey after Lake Van which is mainly fed by underground water. Being a tectonic originated site, the area is located in a closed large basin called Konya basin. On the average, the depth of Lake Tuz is below 0.5 m., surrounded by Kızılırmak (East), Obruk (South), Cihanbeyli (West), Haymana (North) plateaus. The area is poor in inflowing rivers due to its location in the least rain fall receiving part of the country. The surface area of the lake reaches to 164 200 ha in spring. The altitude of the lake is 905 m. In summer, dry period dominates which results in the formation of a salt layer about 30 cm by means of excessive evaporation in the lake. It is one of the most salty lakes of the world as the density of water equals to 1-22.5 cm /g, i.e. salt ratio of 32.4%. This feature brings an economic value as well, of which 70% of salt used in Turkey is produced from Lake Salt.
Countless number of waterfowl bird species nesting and wintering in its large habitats over the lake and the surrounding terrestrial parts including small islets, and swamps, particularly for flamingos endangered in Europe, Phoenicopterus ruber, breeding colonies reach the size of 5 to 6 000 nesting places.

Despite the lake being a protected area and a first-degree natural site, known for the natural beauty of its salt dunes, dozens of companies are operating along its shores to produce salt, thus damaging the entire ecosystem. A recent decision to allow 10 new companies to produce salt in the area prompted huge criticism among environmental activists, who warned that the overuse of the lake's resources could amount to its death sentence.
Turkey's forestry and water affairs minister has brushed aside concerns and scientific analyses regarding the drought threatening the lake. The lake, which has shrunk to 50 percent of its original size over the last 40 years, is only experiencing a "periodic and temporary drought", according to Minister Veysel Eroğlu, who solemnly declared that the government "is in control of [the situation at] the lake."