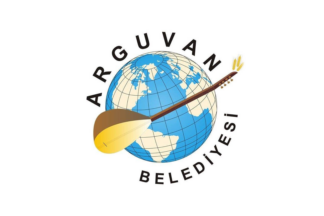 The flag of Arguvan (photo) is white with the municipality's emblem. "Belediyesi" means "Municipality".
The emblem recalls that Arguvan is the site of an international folk music festival.

An investigation was opened against folk music artist Kutsal Evcimen because of insulting Prime Minister of the time Recep Tayyip Erdoğan with the folk song Satın Eşek Sıpaları he sang and with the speech he made during Malatya 11th International Arguvan Folk Music Festival. Giving a testimony within the scope of the investigation, Evcimen indicated that the related folk song was composed 30 years ago by Rıza Karahan, saying "there is simile and metaphor in folk music. There is absolutely no personal discourse. There is no insult in any song I sing, or any speech I make. The AKP government oppresses everyone who doesn't think the way they do, and puts them on trial."
[Freedom of Expression Weekly Bulletin, No. 3/15, 16 January 2015]