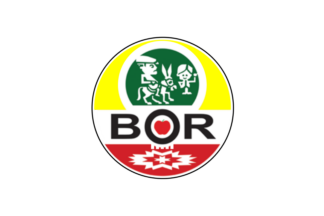 The flag of Bor (photo) is white with the municipality's emblem.
The emblem illustrates the Turkish dictum "Geçti bor'un pazarı sür eşeği niğde'ye" (The bazaar at Bor is over, drive the stupid donkey to Niğde), meaning: "You missed your chance, it's too late to do anything (about it)".

In the old days, the bazaar at Bor lasted a shorter time than most bazaars -- closing down in the mid-afternoon. That was because there was a much larger, busier bazaar on the same day in Niğde. And, if business was slow in Bor, the bazaar's merchants often took off early for the grander opportunity of Niğde -- not waiting even to mid-afternoon. This could pose a problem for late arriving customers, who might have to follow the merchants all the way to Niğde to buy their weekly goods -- or wait a week until the next bazaar in Bor. And a derisive phrase, to portray the late-comers, came into common use. "The Bor bazaar is over, drive the stupid donkey to Niğde," is what the wags would say to those villagers who came late to the Bor bazaar. And how your ears might ring if you had to hear it yourself!
A little ways north of Niğde is the village of Andabalis (Andaval). And this emerging idiom first came to be linked closely with its villagers -- though why that happened is not exactly clear. Since Bor is to the south of Niğde -- it is extremely unlikely that the Andabalisians would have ever gone anywhere near the Bor bazaar. Thus, they could hardly be late for it. But Andabalisians were often subjected to indignities of various kinds (due to their reported naivete and slow-wittiness). So perhaps they became linked to this derisive phrase merely because they fit the "personality profile." Whatever the reason, over time, the Andaval idiom has settled into the Turkish language from that source.
[Idiom Stories]

The flag of Bahçeli (photo, photo) is white with the municipality's emblem. "Belediyesi" means "Municipality".

Bor Chamber of Commerce and Industry

Flag of the Bor Chamber of Commerce and Industry - Image by Ivan Sache, 19 November 2017

The flag of the Bor Chamber of Commerce and Industry (photo, photo) is white with the organization's logo.