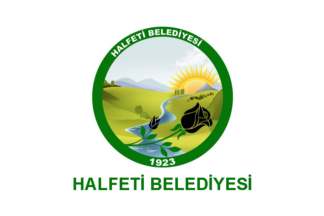 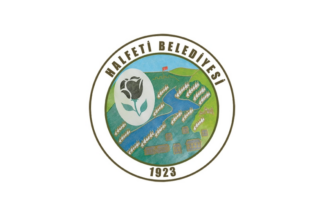 The emblem features river Euphrates and the famous black rose of Halfeti.
The black rose of Halfeti is an extremely rare and oddly beautiful flower. When it first blossoms, this rose is dark red; this dark shade of scarlet "fades" to black as the summer progresses. This flower used to thrive in the town of Old Halfeti.

Old Halfeti was a town located on the eastern bank of the Euphrates. In 2000, just over 2,500 people lived in this town, in which the first settlement has been dated to 855 B.C. The Byzantines called this town Romaion Koula (Roman Castle), and the Arab conquerors translated the name, calling it Qal'at Rum. The town came under Ottoman rule during the reign of Selim I. With the introduction of the GAP project – the Southeastern Anatolia Project – the Birecik Dam was built in the 1990s, and the area was filled with water in April 2000. Old Halfet is now submerged under water. The residents of the Old Halfeti village were relocated to the "new" Halfeti village, at a distance of approximately 10 km. The residents took their roses with them when they moved.
However, the rose, also known as the Arab Bride or Arab Beauty, did not thrive in its new location. The soil in Old Halfeti had been fed by the waters of the Euphrates, and had a unique pH level. The soil in New Halfeti was different, despite the small distance, and the flowers struggled. District officials intervened, collected the seeds and planted them in greenhouses that were close to their original location, in an attempt to imitate the original conditions. As a result, the flower has been saved from extinction.
Not only is the Halfeti rose unique in being black; the black rose of Halfeti can be taken to other regions and planted, but when it flowers, it emerges as a classic red rose. The black hue of the flower can only be produced in the Halfeti region of Urfa.
[Daily Sabah, 24 July 2015]