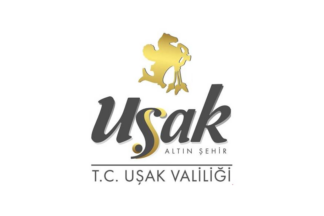 The new provincial emblem was adopted in March 2017. The motto reads "Gold Town" and the graphical element is modeled on the winged hippocamp brooch, part of the Lydian Hoard.
[Milliyet, 22 March 2017]

For thousands of years it lay underground, part of the buried treasure of the legendarily wealthy King Croesus. But since being illegally excavated in the 1960s, it has been stolen, replaced by a fake, sold to pay off gambling debts and has allegedly brought down a curse on its plunderers.
Now the 2,500-year-old golden brooch is to be returned home to Turkey, where it will be given a special place in a new national museum.
The Turkish culture minister, Ertugrul Günay, has announced that German officials have agreed to return the missing artifact, a brooch in the form of a winged seahorse, possibly as early as this year.

The brooch is part of the Lydian Hoard, known in Turkey as the Karun Treasure, which was looted from iron-age burial mounds in western Turkey in 1965. The artefacts were sold on, eventually to be exhibited in the New York Metropolitan Museum of Art in the 1980s. After a six-year legal battle that reportedly cost Turkey £25m, it was repatriated in 1993 and went on display in the Uşak museum. But in 2006, after an anonymous tipoff, the brooch on show was discovered to be a fake, with the original missing again. After an investigation the director of the museum, Kazım Akbıyıkoğlu, who had been instrumental in recovering the artefacts from the US, was arrested with 10 others. Akbıyıkoğlu admitted selling museum treasures to pay off gambling debts and was jailed for 13 years. He blamed his misfortune on an ancient curse said to afflict those who handle the treasure. Popular rumour has it that all seven men involved in the illegal digs of the burial mounds died violent deaths or suffered great misfortune.

Although the details of the brooch's latest recovery are unclear, Turkish officials are delighted. "I am very happy to hear that the piece will finally return home," said a culture and tourism official, Serif Aritürk, who is responsible for the museum in Usak. "Since I was in office in 2005 and 2006 I felt personally responsible for the theft ; our directorate came under a lot of pressure." He added that he had never doubted the brooch would reappear. "No collector would have dared to acquire such a well-known artifact, it was clear that the thieves would not find a buyer easily."
The Archaeological Museum in Uşak is only able to display 2,000 of its 41,600 historical objects. A larger museum, to open in December 2013, is being built to house the 450 pieces of the Lydian collection in its entirety. With the retrieval of the hippocamp brooch, Aritürk hopes the treasure's curse has finally been lifted. "The piece will receive a place of honor in the new museum. Once it returns home, I am sure tourists and those that appreciate history and art will follow."
[The Guardian, 25 November 2012]