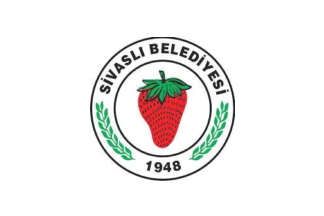 The flag of Sivaslı (photo) is white with the municipality's emblem in the middle. "Belediyesi" means "Municipality".
The emblem of the municipality features a strawberry. Sivaslı is famous for strawberry cultivation, celebrated every year in the Strawberry Festival.

The flag of Ağaçbeyli (photo) is white with the municipality's emblem in the middle. "Belediyesi" means "Municipality".

The flag of Selçikler (photo) is white with the municipality's emblem in the middle. "Belediyesi" means "Municipality".
The emblem of the municipality features the ruins of the ancient town of Sebaste.

Sebaste is known to us, apart from Hierocles, Synecdemus, 667-8, by its coins and more so by its inscriptions; the latter identify it with the present village of Sivasli, in a fertile region at the foot of Bourgas Dagh, in the eastern portion of the plain of Banaz Ova, a vilayet of Brousse [Bursa]. The neighbouring village of Sedjukler, a mile and a half distant, is also full of its ruins. Sebaste owes its name and foundation to Emperor Augustus, who established inhabitants of the adjacent villages in it; the Phrygian god Mên and his Grecian equivalent Zeus, as well as Apollo and Artemis, were adored there. The town was governed by strategi or archons, and in A.D. 99 a gerousia or council was established. Several of the inscriptions, which have been discovered in Sebaste, are Christian.
[The Catholic Encyclopedia]

The flag of Tatar in Silvasli District. The flag is white with logo.
https://www.bombagazete.com/haber-tatar-belediyesi-su-depolarini-halkin-kullanimina-acti-31760.html
Tomislav Šipek, 16 October 2021