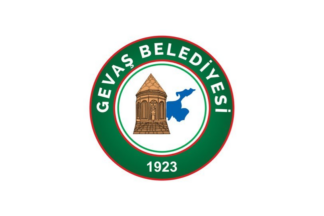 The flag of Gevaş (photo, photo, photo) is white with the municipality's emblem. "Belediyesi" means "Municipality".

The emblem features Lake Van and Halime Hatun mausoleum, which is located on the eastern side of the Seljuk cemetery of Gevaş.
According to the inscription on the entrance gate, the mausoleum was built in 1335 by Asad,the son of Ahlati Pehlivan, for Halime Hatun, the daughter of Emir Melik İzzeddin.
The two-storied mausoleum has a square plan with a staircase leading to the eastern gate. The corners were made on a pricey square base with onyx stones. The walls covered with a pyramidal cone were built with smooth cut stone material. On all facades, ornaments consisting of vegetal, geometric and written forms in strips and medallions were placed.
[Van Culuture and Tourism Directorate]