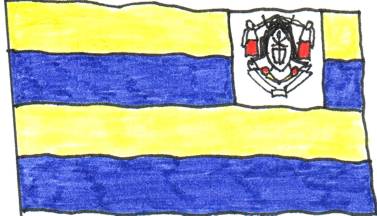 The Institution of Traditional or Cultural Leaders Act 2011 was adopted in April 2011 by the Ugandan Parliament, passing into law the Bill which was published on 07
December 2010 as Bill No. 24 in the "Uganda Gazette", No. 72, vol. CIII.

The list of the recognized cultural institutions and leaders is appended at the end of the Law, namely:

The Padhola Kingdom is located in the West Budama County of the Tororo District in eastern Uganda.

Four horizontal bands of yellow over blue over yellow, over blue. On the top two bands near the fly is a white panel with the Royal Arms in full. This flag can be seen (with a gold frill in the fly) being held by The Adhola. 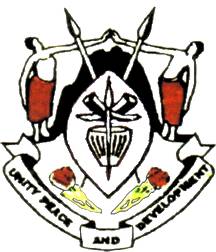 The Royal Coat of Arms comprises a white shield with a drum, above as a crest, crossed elephant tusks, with an upright spear superimposed overall, all white, with black shading. Behind the shield are two crossed spears in saltire, superimposed upon a black mountain or hill. The Supporters are two natives wearing maroon from the waist down with their left & right arms out stretched, hands touching.
Below the shield are maroon (or red) flowers with yellow stalks.
Motto, in black on a white ribbon "UNITY PEACE AND DEVELOPMENT"

The Coat of Arms of the "Tieng Adhola" (The Adhola Union) which was founded in 1937 is the same as that described above except the shield is maroon.
John D McMeekin, 21 Apr 2007