Jamhuri ya Uganda / Republic of Uganda

Black, yellow, red are the colours of the Uganda People's Congress party, who came to power in elections in April 1962.  The flag was adopted at independence on 09 October 1962. To quote Whitney Smith ("Spectrum Vlaggenboek", 1975): "The three colours were intended to symbolise the people of Africa, sunshine and brotherhood. The design was made by the Minister of Justice, Mr Grace Ibingira."  The crested crane was also the flag badge of Uganda under British colonial rule.
Dylan Crawfoot, 22 Oct 1999

I spoke to Grace Ibingira and he told me he designed the Ugandan flag (he was first and foremost an artist). It was the second of two designs.
Tomas Zamudio, 25 Feb 2003

Is current central roundel of the Uganda flag the same as that in the fly of a blue (or red?) ensign of the colonial flag?
António Martins, 24 Oct 1999

I'm not sure if it was the exact same design, but there's no reason why it wouldn't have been. Smith says the crested crane "first appeared in the colonial badge of Uganda under British rule", and Crampton simply says (in talking about the origins of the coat of arms) that the crane was the former flag-badge.
Dylan Crawfoot, 25 Oct 1999

Uganda in Album2000: National Flag. CSW/CSW 2:3
Six striped flag of black-yellow-red-black-yellow-red with a crested crane in full colour in a white disk in the middle.
Željko Heimer, 29 Aug 2002

On Graham Bartram's website is the Ugandan national flag with the usual proportions, but the disk is not touching the yellow stripes. Moreover there is a big cut-out of the emblem.
Jarig Bakker, 09 Oct 2002

An article to commemorate Uganda's independence day (not dated) in the New Vision Online at also claims that the Ugandan flag was designed by Grace Ibingira, the then Minister of Justice, but further (8th paragraph) it states: "The flag, designed by Cecil Todd, and the coat of arms remain as they were 45 years ago."

On the 50th anniversary of independence and adoption of the flag, the Uganda National Bureau of Standards (UNBS) has published the Uganda Flag Standard (FDUG 1) with official specification for the national flag.  A pdf copy is available at the World Trade Organization website.

Unfortunately, the document does not specify the colours of the flag beyond the "black," "yellow," "red," and "white" mentioned in the National Flag and Armorial Ensigns Act.  In addition, the document does not specify how the crested crane/grey crowned crane should be constructed or illustrated. It simply states that the crane shall stand on one leg and face the flagpole (hoist).

The document is a guide for the manufacture of the flag. It deals with the quality of the materials used and, the workmanship during the manufacturing process.
Andy S, 02 Nov 2012

The protocol manual for the London 2012 Olympics (Flags and Anthems Manual, London, 2012 [bib-lna.html]) provides recommendations for national flag designs. Each National Olympic Committee was sent an image of their flag, including the PMS shades, by the London Organising Committee of the Olympic Games (LOCOG) for their approval. Once this was obtained, the LOCOG produced a 60 x 90 cm version of the flag for further approval. So, while these specifications may not be the official, government, version of each flag, they are certainly what the National Olympic Committee believed their flag to be. 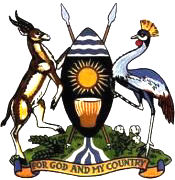 The supporters on either side of the coat of arms are the Ugandan Kob representing the wildlife of Uganda and the Crested Crane, the emblem for Uganda.  The drum represents Uganda's culture. It was once the belief that drums could scare away evil spirits. A drum chain can be used to transmit messages over a distance of 100 miles in less than one hour.  The spears and shield are representative of Uganda's traditional form of weapons and symbolise the nation's defence and security.
The motto reads: "For God and My Country".
Info from this site.
Dov Gutterman, 06 Feb 2000

President Idi Amin Dada not only caused the fall of his country and the death of 300,000 people, he also stole the originals of the flag, emblem and coat of arms of Uganda and brought them to Saudi Arabia.

The government of Uganda officially asked the government of Saudi Arabia assistance in the return of the national symbols of Uganda. When Amin was expelled from Uganda by the Tanzanian army and Ugandan soldiers in rebellion, he fled to Saudi Arabia.  He took with him the originals of the national flag, emblem and coat of arms, which had been granted to the new country by the British colonial Governor in October 1962 for the independence. It is possible that Amin's children sold the symbols after their father's death in 2003.
Source: the Chinese agency Xinhua (16 January 2005) (in French).
Ivan Sache, 20 Jan 2005

image by Jaume Ollé, from his site.

This is the provisional Ugandan flag (Mar 1962 - 09 Oct  1962).  The flag was adopted by the ruling party to be the national flag and was hoisted unofficially. However, the Congress Party won the elections, and a new design based on their colours was adopted and became the current national flag.
Jaume Ollé