The "Sons in Service" flag was used during World War I and World War II. Each family was entitled to hang a small Son In Service flag in their window, the blue star in the center of the red-bordered white rectangle signified a family member in active service. The star was replaced (or covered) with a gold star (in practice, yellow or dark yellow) if the family member died in action. (Hence the name of the organization "Gold Star Mothers" of women who had lost sons in the war.) There were other variations to the star for missing in action, injured, captured, etc, etc, but flags of that sort are rarely, if ever, seen.

Sons in Service flags made and used by families usually were no larger than about one foot long. They were always hung vertically, a stick being sewn into the top heading of the flag and a piece of string attached to both ends of the stick - the string suspended at its midpoint from a hook or some other feature of a front window of the home.

If a family had a husband and a son, or multiple family members in the service of their country, then additional blue stars were set into the white rectangle. Organizations and corporations extended this practice to fly flags incorporating stars for each of their members/employees who were off to war and, of course, would change/overlay the blue stars with gold ones when the news came back that one of theirs had died in action. These larger flags (I have one with some 50 stars in a circle, a quarter of them in gold, measuring about 8 feet long overall) were sometimes flown outside on a pole, but most often were suspended from the ceiling of the factory / meeting hall indoors.

It is not always easy to determine a date for these flags, though I believe that WW I era flags were more likely to be made of wool, and WW II flags usually were sewn of cotton bunting. However, they are definitely no older than 1917, the date of entry of the USA into WW I. Some WW II era flags with one or two stars were printed on silk and sold retail for those who didn't feel like sewing their own.
Nick Artimovich, 2 May 1997

To elaborate on what Nick Artimovich and Nathan Bliss wrote about this flag, I have a book entitled "The Flag of the United States -- Your Flag and Mine" by Harrison S. Kerrick (Champlin Printing Co., Columbus, Ohio; 1925) that states (pg. 114):


"The State of Massachusetts, by resolution of its House of Representatives, May 28, 1918, established a new form of recognition of service under the U.S. Flag, based upon the practice that arose during the World War of displaying in the home office, club, or factory, a blue star (loyalty, sincerity, justice) upon a white field (hope, purity, truth) each star representing a member of the family or organization in service, by adding thereto certain emblems symbolizing events of service as indicated on opposite page."

The illustration shows nine different emblems, all based on the blue 5-pointed star (pointing up). It is entitled "The Star of Service - For the Flag, for Liberty, for Justice.": Below the illustrations is the following caption:

"Gold represents wounds, distinguished service and death. Red, represents missing or captured. If desired, rank may be shown by the proper insignia of Officer or non-Commissioned Officer placed directly above the star. Service in the 'Zone of Advance' and foreign service may be symbolized by a gold chevron placed below the star, one shown for each six months of such service."

Notice there is no mention of the red border of the flag, as used in practice.
Dave Martucci, 2 May 1997 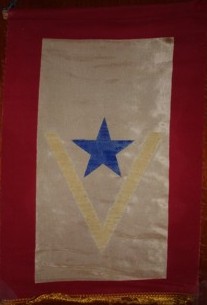 This appears to be a service star flag for "Service in the 'Zone of Advance' and foreign service may be symbolized by a gold chevron placed below the star, one shown for each six months of such service."
Randy Cowart, 11 April 2006

I have just stumbled across a site which seems to indicate a couple more symbols being used - red crosses for nurses and chaplains crosses for chaplains. Whether this usage was official or unofficial I know not.

From a Texas church history page-
"Pastor Bloom served the church during World War 1, and also acted as chaplain of the Eight Infantry Regiment of the Texas National Guard. The church's service flag has forty-six blue stars representing those in the various military branches, plus two red crosses for nurses and Chaplain's cross for Pastor Bloom. Three of the blue stars were replaced by gold ones for the three sons of the church who died in the war."
[from home.flash.net/~giwallin/history.html]
Ned Smith, January 2006

On http://www.gireports.com/page.cfm?Service_Flag (no longer available) they had more on the service flag. At one point it says:
"CPT Robert Queissner of the 5th Ohio Infantry is credited with starting the service flag tradition. He made a small flag to display in his home to honor his two sons who fought on the front lines in Europe in World War I. The flag was white with a red border and included two blue stars in the middle, one representing each son."
Peter Hans van den Muijzenberg, 22 September 2005

Although not the first design submitted to the US Patent Office for a Service Flag (nor the last), the two patents, numbers D0051463 and D051464 were the first Service Flag Designs patented on November 6, 1917. The two designs were by, and patents granted to, Robert L. Queisser of East Cleveland, Ohio. The first, D051463, was for a Service Flag design watch fob or "other articles of adornment, as stick pins, buttons, or brooches" and it shows four stars in a staggered pattern. The other patent, D051464, was for a flag with two stars.

The authorization for the flag is still on the books as 36 USC 176 and the instructions for design and display in the Department of Defense awards manual, DoD 1348.33-M.
Joe McMillan, 13 July 2000

The current regulation is in the Department of Defense Awards Manual, DOD 1348-33M, which is quoted below:

C10.3.4.1.2. Flag for Organizations. The flag for organizations shall correspond to that described for an immediate family in paragraphs C10.3.4.1.1.1. through C10.3.4.1.1.4., above, subject to the following additional provisions:

C10.3.4.1.2.1. Instead of using a separate star for each Service member, one star may be used with the number of Service members indicated by Arabic numerals, which shall appear below the star.

C10.3.4.1.2.2. If any Service members are deceased, as determined under the circumstances cited in paragraph C10.3.4.1.1.4., above, a gold star shall be placed nearest the staff, or above the blue star in the case of a flag used in a vertical display (Figure C10.F1.). Below that star shall be the Arabic numerals.

I believe World War II practice may have been slightly different. You can read the whole thing at www.dtic.mil/whs/directives/corres/text/p134833m.txt

The term "service flag" can apply to all the military and civilian service flags. That is blindingly obvious. But by act of Congress (Title 36, United States Code, Section 901), the flag to be displayed by members of the immediate family of persons in military service during time of hostilities is Legally, Officially designated as the "Service Flag."

DoD 1348.33-M authorizes the Secretary of Defense to approve the design of the flag and prescribe regulations governing its manufacture and use. It also refers to this flag as "The Service Flag." The fact that some organizations and flag companies call it "The Blue Star Banner" is neither here nor there. The flag is an official symbol authorized by Congress. There's nothing wrong with calling it the Blue Star Banner, of course, and there is indeed a long tradition of referring to it by that nickname. But a nickname is all it is--like Stars and Stripes or Old Glory for the national flag. It is not the official name of this flag.

The following is the law:

The information regarding the gold star came from an original order form dated in early 1948. It's official name is Gold Star Lapel Button. There still exist a number of the blue star pins on their original card of issue and all the ones I've owned or have seen had been labeled "In Service Emblem." They probably picked up the "Son" because most persons in the military are men. There are patent files in the state library and next time I go up there I'll look it up and get a copy of the information. The patent was issued on November 6, 1917 but I don't have the number.
Ed Sims, 11 July 2003

Blue Star Mothers of America, Inc was founded in Flint, Michigan in 1942 and became a U.S. Congress chartered corporation in 1960. Their website www.bluestarmothers.org/ states the origin of their flag: "The Service flag, also called the Blue Star Flag, was designed and patented by WWI Army Captain Robert L. Queisser of the 5th Ohio Infantry who had two sons serving on the front line." .
Steve Shumaker, 13 March 2010

We Honor Those Who Serve Version

I spotted a flag (twice) here in my hometown in Ohio. It was being flown beneath the American flag. The flag has a white field. A horizontal service star is on the centre of the flag. The blue text "We Honor Those Who Serve" surrounds the service star.

Apparently, the American Legion is distributing this flag. It originated as a yard sign; now it is a full size flag.
Sean McKinniss, 27 September 2003

There is much information, mostly misinformation, on the net about the United States Service Flag. I am doing extensive research into its origin and usage and the following are facts that I have uncovered which I am in the process of fleshing out:

These are the two designs (for 1 member and 2 members in the service) by James G. McIlroy
Dave Martucci, 14 June 2010

This design predates the Queisser design but probably not the McIlroy designs. It is directly based on the Japanese custom.
Dave Martucci, 14 June 2010

The official Massachusetts Service Banner. This is a copy of the actual banner that was displayed on the Massachusetts State House during the war.
Dave Martucci, 14 June 2010

The American Red Cross Service Flag. This flag represented one member of the Red Cross. Additional members were entitled to add a smaller cross placed in the corners of the flag.
Dave Martucci, 14 June 2010

An unofficial design representing women who married soldiers off to the front, flown subordinate to the Service Flag.
Dave Martucci, 14 June 2010

An official US Dept. of Labor design representing veterans rehired after the war. The red stars were placed in number of the actual number of men rehired or a large red star with a white numeral on it could be used.
Dave Martucci, 14 June 2010

The official US Dept. of Agriculture Service Flag for the School Garden Army, which promoted vegetable gardening by school children. There was also a "Home Canning Service Flag".
Dave Martucci, 14 June 2010

The official Canadian Service Flag. More Maple Leaves were to be added for additional service men; if any were killed in service, the leaf would be replaced by a red leaf (although in some accounts, gold leaves were also used).
Dave Martucci, 14 June 2010

Service in the 'Zone of Advance'