In 1861, one star was added, representing Kansas, bringing the total number of stars to 34. There were thirteen stripes representing the thirteen original colonies.
Rick Wyatt, 5 April 1998

A passage in Michael Corcoran's book For Which it Stands [ccc02], on page 85, recounts that on 29 January of 1861 Kansas was admitted to the Union thus increasing the number of states to 34, and mandating that the 34 flag would become official on 4 July 1861. Yet, on Washington's Birthday, 22 February 1861, less that a month after admission, a 34 star flag was hoisted by Abraham Lincoln when he stopped at Independence Hall in Philadelphia, on his way to Washington D.C. I think the practice of using "once official" and "not-yet-official flags" was much more common than currently believed.
Jim Ferrigan, 13 February 2007

In the early 19th century William Driver, a merchant seaman from Salem, Massachusetts, became captain of a U.S. war ship, he wrote that he was impressed by the flag it flew and wrote "I shall call it 'Old Glory'" When he retired from the Navy he took his flag with him and settled in Tennessee and proudly flew the Old Glory from his home. The rest of the story
R. Nathan Bliss, 22 February 1996
Nick Artimovich, 22 February 1996

This flag has the stars arranged with one in the center and two concentric rings of stars and one in each corner. This is one of many designs used during the Civil War. The pattern used here became popular during the Civil War until the late 1800s.
Dave Martucci, 7 December 1997

The "Great Flower" flag, also known as "The Candy Stripe" flag because of the red and white "candy stripe" running down the left side. Five asymmetric petal shapes loop out from the off-center heart of a graceful "Great Flower" pattern of thirty-four stars. The designer and locations that used this 1861-1863 flag are unknown.
Blas Delgado Ortiz, 28 July 2001

Five clusters of six stars each with the final four stars being on the top, sides and bottom, centered. This flag shows great care in its design and in the making of it. The five clusters of stars form a St. Andrews cross and the other four for a St. George cross. The designer is unknown. This extraordinarily beautiful design also evokes, more poetically, great white blossoms or magnified snow crystals.
Blas Delgado Ortiz, 28 July 2001

The unusual length of the field of stripes indicates that this great standard was probably a naval flag. The pattern is basically a square "phalanx" of militarily aligned stars, with two independent "leaders" at left, and two "stragglers" at right. The result of this arrangement is a striking and very likely unique interpretation of the theme.
Blas Delgado Ortiz, 28 July 2001 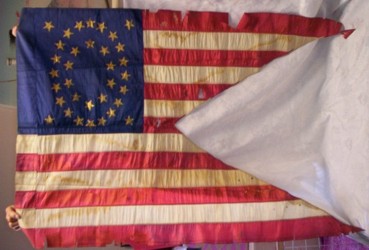