image by Masao Okazaki, 21 October 2022
based on photo

From www.city.newport-beach.ca.us/nbpl/aboutus/newport_beach_time_line.htm "1963 Official Newport Beach city flag adopted, designed by 11-year-old Jeff Wilcox" and from www.newportbeach-cvb.com/Press/index.cfm?action=Article&ArtID=567 "This event features a traditional American flag lowering ceremony, including lowering of the State of California and Newport Beach city flags."
I haven't been able to find an image or description of the flag yet.
Ned Smith, 5 March 2005

My drawing of the flag is according to the requirements of the municipal code. It is a 3 x 5-foot flag with a seal of 24 inches in diameter, and gold and blue lines 4.5 inches wide.
Masao Okazaki, 21 October 2022

The seal itself is quite heraldic in both concept and execution, especially the central image. The seal follows the standard circular format, with white being the basic color. Surrounding the seal is a thick external border in deep ultramarine, indented at the cardinal points of the compass. Running around the entire top of the outer ring are the words 'CITY OF NEWPORT BEACH' in deep ultramarine block lettering, with the word 'CALIFORNIA' appearing at the bottom in much smaller but similarly colored block lettering. The outer ring is separated from the central image by a thin internal border, also in deep ultramarine. the image itself is quartered, but the actual quartering is such that the quarters are unequal in size, the upper ones being much larger than the lower ones. The fess is a thick dark horizontal line in dark ultramarine, with the pale being a much thinner vertical line in the same color. The entire upper portion of the central image is dominated by the sails and masts of a clipper ship in ochre. The lower left quarter is white, and depicts two fish, an albacore or tuna facing right and a much smaller fish, possibly a grunion, facing left. The lower right quarter attempts to give a wave effect.
Ron Lahav, 6 March 2005

The City Seal
Rexford Brandt was commissioned on May 18, 1957 to design a new official seal for the City. His modifications consisted of:
- simplifying and modernizing the sailboats;
- deleting the anchor;
- including two fish (albacore, as recommended by members of the Balboa Angling Club);
- eliminating the life-preserver outline; and
- using an outline suggestive of compass points.

On July 22, 1957, Ord. 814 adopted the City Seal and described it as being circular, containing a center scene depicting sailboats, fish, and ocean waters; and having the words "City of Newport Beach, California" surrounding the center scene.

Explanation of the City Seal:
- The ripples of water in the lower right hand corner symbolize the wave action on the ocean front.
- The two albacore represent Newport Beach's origin as a fishing village.
- The sailboats portray a predominantly seashore recreational area and yachting resort.
- The outer circle surrounding the seal suggests the four cardinal points of the compass which encompasses the whole as a nautical theme.

Section 1.16.030 Official Flag.
An official flag for the City of Newport Beach is hereby adopted. The official flag shall be rectangular in shape with the City seal centered on a white field and with a marine blue stripe forming the length of the flag at the bottom and a gold stripe forming the length of the flag at the top. The standard size of the official flag shall be three feet in width, including the marine blue and the gold stripes, and five feet in length. The stripes shall each be four and one-half inches wide and the City seal shall have a diameter of twenty-four (24) inches. Any reproduction in other than standard size shall maintain the same proportions as the standard size. (Ord. 1071, 1963: 1949 Code § 2700.2)

Section 1.16.040 Display of the Official Seal.
The official seal of the City of Newport Beach, when used for display purposes, or as a means of identification, shall be displayed in its entirety, without any deletions or additions thereto, and shall not be obscured from view in any manner. (Ord. 1582 § 1, 1974
Don Webb, Mayor, March 2005 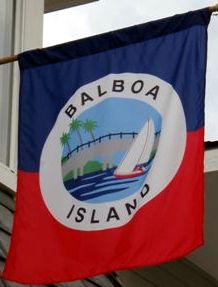 "Balboa Island is one the loveliest places in Newport Harbor, California. While it is named as a singular island - there is no "s" attached to the word "island" - Balboa Island is actually made up of three artificial islands near the coast of the now-commercially famous Orange County, thus technically making it a peninsula. These three artificial islands are as follows, from the largest to the smallest: Balboa Island, Little Balboa Island, and Collins Island. It is currently home to an interesting, thriving community.

The area may be small, but there are lots of people who know what a wonderful place it actually is - because they live there, or vacation there. It in fact has the densest community in the county; and the fact that so many people like living in a small area means that it has to be something really special." - from: http://www.balboaisland.com.

"According to the 2000 US Census, Balboa Island is one of the densest communities in Orange County. Approximately 3,000 residents live on just 0.2 square miles (0.52 km2) giving it a population density of 17,621 person per square mile - higher than that of San Francisco." - from Wikipedia: en.wikipedia.org/wiki/Balboa_Island,_Newport_Beach,_California.

And of course the flag. You can see it on a photo here: 4.bp.blogspot.com
Valentin Poposki, 1 July 2009

Without context it is possible that this is a unofficial, commercially made decorative flag rather than the flag of Balboa Island. The seal does not resemble the logo at www.balboaisland.com, though this proves nothing, being a common arrangement.
Eugene Ipavec, 2 July 2009