The City of Boston was founded in 1630, and incorporated as a city in 1822. Over the years it has expanded by annexing neighboring territory and municipalities.
Dave Martucci, 26 January 2019

For its first 160 years, Brighton (including present day Allston) was part of Cambridge, and was known as "Little Cambridge.” Brighton separated from Cambridge in 1807 after a bridge dispute, and was annexed to Boston 5 January 1874. There is no known flag.

The seal was designed by the Reverend Frederic A. Whitney in 1864. It depicts a local scene of the buildings involved in the trade in seeds, flowers, trees and fruit, which the early economy thrived on. The scene is enclosed by branches of laurel and oak and at the top is a ribbon bearing the name “BRIGHTON”.
Dave Martucci, 26 January 2019

Charlestown was a town founded in 1628 and incorporated a city in 1847. It was annexed by the City of Boston 5 January 1874. Home to Bunker Hill and the former US Navy yard Boston, Charlestown was the first Massachusetts Bay Colony capital. There is no known flag.

The City Seal shows the Bunker Hill Monument flanked by two rows of buildings. Surrounding this scene is the motto “Liberty—A Trust To Be Transmitted To Posterity”. At the top of the seal is the name “CHARLESTOWN” and around the bottom inscriptions detailing the founding and incorporation as a city.

There are some vague references to “Charlestown flags” in the 19th century but likely these refer to flags made at the Navy Yard Boston.
Dave Martucci, 26 January 2019

Charlestown, it is reported, uses the "Bunker Hill Flag” as a neighborhood flag although it is not clear which version. Likely it is the blue field with the cross and tree in the canton.
Dave Martucci, 29 January 2019

Dorchester (including present day Mattapan and a portion of South Boston) was incorporated as a town in 1633. It is the largest area of the city and was annexed by the City of Boston 3 January 1870.

In April 1865, Dorchester’s Town Meeting voted “to procure … a Corporate Seal of the town.” In that regard a committee was formed to design a town seal consisting of Edmund J. Baker, Edmund P. Tileston, Nathan W. Tileston, and others including Dorchester’s Antiquarian and Historical Society.

Their report described their purpose: “Your Committee have sought to emblazon upon the Town Seal such a device as would symbolize the acts which rendered the early settlers of this town a peculiar [particular] people, and objects of gratitude and veneration by their descendants for all time to come.”

The design was a shield charged near its base with the image of a rough-hewn, thatch-roofed church, without a chimney representing the early settlers. To the rear of the church, another rude, thatched structure appeared on the shield, representing Dorchester’s first school. To the left of those images is a “rude mill, with its large wheel, which is seen upon the left bank of the Neponset River, the course of which river, from its source to its mouth, lay through the ancient territory of Dorchester.” In the background are depicted the Blue Hills.

On top of the shield, a castle with three imposing turrets . “The triple-towered castle surmounting the shield is adopted in respectful memory of Dorchester in Old England, of whose seal this is the principal charge (in commemoration of that borough having been formerly a Roman fortress), and from which place the infant colony derived much of its strength, both physically and spiritually.”

A banner draped beneath the castle and along the top and sides of the shield bears the motto “Pietate, Literis, Industria.” which translates as “Piety, Learning, and Industry”.

A proposal by Tom Hale of South Boston for a Dorchester flag was made in the 1980s. The design would have been a white flag charged with a red St. George’s Cross throughout, with the Dorchester Seal in full color in the center.
Dave Martucci, 26 January 2019

East Boston, sometimes today referred to as “Eastie”, was a territory consisting of unincorporated islands connected by land fill before being annexed in 1836.

The East Boston flag was designed by East Boston artist Joseph Porzio [1918-1979] at the request of the East Boston Recreation, Master Planning, and Land Use Advisory Council. The ship on the flag is the Flying Cloud clipper ship built by master shipbuilder, Donald McKay. The 5 stars underneath the Flying Cloud represents the original 5 islands and 1637 is the year East Boston was annexed to the City of Boston. https://www.facebook.com/EastBostonMuseum/

The five islands were Noddle's; Hog's (later known as Breed's Island, and would still later become Orient Heights); Governor's; Bird; and Apple. Beginning in 1637, Noddle’s Island was used to graze cattle for consumption by Boston residents and therefore many consider this as the date of informal annexation, although formal annexation was not done until 1836. The islands were all connected eventually by landfill and today the principal landmark of East Boston is Logan Airport.

The flag was first raised on 11 November 1975 at the dedication of the Heritage Apartments.
Dave Martucci, 26 January 2019

Hyde Park was a town incorporated 22 April 1868 and annexed by the City of Boston 1 January 1912. It includes the neighborhood of Readville whose Camp Meigs was a major muster and training group during the US Civil War (1861-1865). The 54th Massachusetts Volunteer Infantry, one of the first official African-American units in the United States Army and which was commanded by Col. Robert G. Shaw trained here. There is no known flag.

The seal includes the name and incorporation date of the town surrounded by a belt bearing the motto “Si Tentas Perfice”, which is Latin meaning “If you begin, finish”.
Dave Martucci, 26 January 2019

Roxbury was one of the first towns founded in the Massachusetts Bay Colony in 1630, and became a town in 1646 and a city in 1846 before being annexed to Boston on 5 January 1868. It adopted a seal upon becoming a city but no known flag.

The seal illustrates a view of the city in the background with a goddess holding a crown in one hand and supporting the shield of Massachusetts with the other, in the foreground right. The motto is "Saxetum Dextris Deoque Confidens” which is Latin meaning "[In this] rocky borough, by God's right, we are confident”. The other inscriptions refer to the date of settlement and the date of incorporation as a town as well as the name “ROXBURY”.
Dave Martucci, 26 January 2019 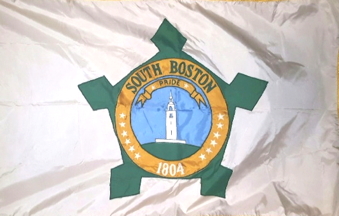 Formerly named Dorchester Heights, a part of Dorchester, it was annexed 6 March 1804 and renamed South Boston at that time. It is often referred to as “Southie” and should not be confused with the South End of Boston.

South Boston adopted a flag in 1978. Designed by Tom Hale, now of Quincy, Massachusetts. the flag is white with an emblem in the center featuring the Dorchester Heights monument in the center, above which is a ribbon inscribed “Pride”, recalling Southie’s motto, "Southie Pride”.

Surrounding it is a gold ring with the name "SOUTH BOSTON" and 12 stars representing the na- tionalities of Southie. The date 1804 is the year Dorchester Heights was annexed to Boston and renamed South Boston.

These emblems are placed on top of a five-pointed shape in green recalling the star fort formerly the site of Castle William, later rebuilt as Fort Independence, the site of the first salute to the US Flag by a British Navy ship after the Revolution. The five points represent five famous Americans, Hancock, Adams, Dearborn, Winthrop and Shirley.
Dave Martucci, 26 January 2019

West Roxbury (including present day Jamaica Plain and Roslindale) was incorporated a town May 24, 1851 after being separated from Roxbury. It was annexed to the City of Boston 5 January 1874. It had a plain seal bearing only that date and some generic decorations. There is no known flag.
Dave Martucci, 26 January 2019