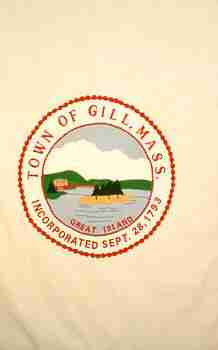 A white flag with a colored town seal showing a canoe with several people on a lake before a village and the words GREAT ISLAND below. Surrounding it is a ring, bordered red, giving the town name in orange and the date of incorporation in white. Gill is in Franklin County.

Gill, incorporated September 28, 1793, was originally part of Deerfield and was included in the portion set off from Deerfield June 9, 1753, as the district of Greenfield, which became a township that same year. The first settlers on the land that became Gill, who arrived before 1753 and lived later that 1793, were therefore inhabitants of the towns of Deerfield, Greenfield and Gill, successively, even though they never moved. Some residents of Northfield also became inhabitants of Gill when the "Grass Hill" section of Northfield was annexed on February 28, 1795.